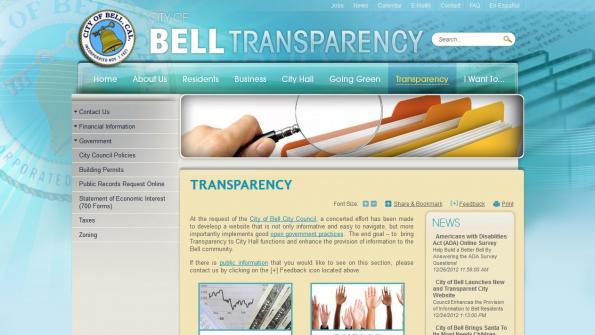 Santa Monica, Calif. – The Sunshine Review, a national non-profit organization dedicated to government transparency, recently released its rankings of the most transparent government Web sites in the country.

The city of Bell, Calif., in particular was proud to have its new Web site's efforts for transparency recognized. In the wake of past municipal controversies, the city had in previous years received a “D” ranking from the Sunshine Review—one Mayor Ali Saleh was pleased to see improve, according to published statements.

“The City’s new website is an important tool in our effort to move the city forward and enhance transparency to City Hall functions. We have brought City Hall to residents’ front doors providing detailed information about local government and its services – information that can be conveniently accessed 24/7. This new Web site isn’t just a stark contrast to the past; it’s a complete 360 degree turn that clearly demonstrates our continued commitment to transparency."

The Sunny Awards are given to governmental bodies whose Web sites pass a 10-point transparency checklist which includes open, easily accessible information on items such as budgets, meetings, lobbying, financial audits, contracts, academic performance, public records and taxes. Since its inception in 2008, the Sunshine Review has analyzed more than 7,000 state and local entities.