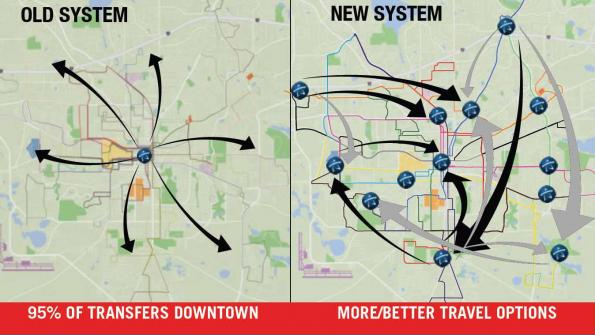 Since the 1960s, StarMetro, the transit department for Tallahassee, Fla., has operated a hub-and-spokes system that brings all bus passengers to one central transfer location downtown. A June 2009 survey of 2,500 passengers revealed that 93 percent of passengers were actually headed somewhere other than downtown. Clearly, a change was needed.

Research of other transit systems revealed that implementing a 'decentralized' or 'grid-like' system with numerous transfer points throughout the city was a logical solution.

Typically, a new, more costly system is implemented in set phases to allow passengers and operators time to adjust. StarMetro was tasked to decentralize all routes at the same time and within its standard operating budget, which is an industry first. The new, decentralized system was implemented on July 11, 2011, and StarMetro experienced an increase in ridership within six months of implementation – 21 percent in December 2011 and 15 percent in January 2012 (compared to corresponding months the previous year).

The initial transition had its share of concerns. Ridership increased by 10 percent during StarMetro's Free Transit Week – a bump so large the system faced performance issues. So many people were attempting to use transit that buses could not accommodate all passengers that wanted to ride. StarMetro continued its public involvement through the end of 2011 to solicit input on continued improvements. As adjustments were made during the summer and fall months, system performance improved and the number of customer complaints decreased dramatically.