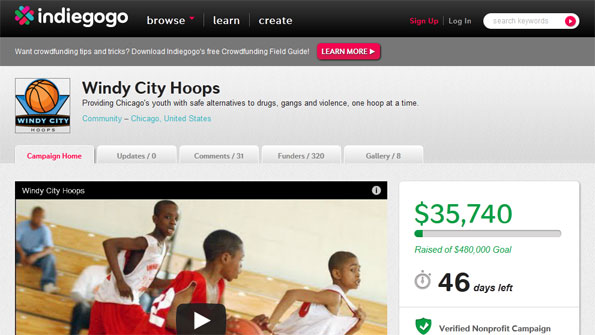 Several cities are experimenting with crowdfunding as a means of paying for city-involved projects.

Two weeks ago, Chicago Mayor Rahm Emanuel announced a major expansion of Windy City Hoops, a community basketball program for at-risk youth administered by the Parks District. He also announced that funding for the expansion would come from donations made through the crowdfunding site indiegogo.com, which allows residents to contribute an amount of their choosing. After 14 days, the project has raised nearly $36,000 of the needed $480,000 with 46 days left to go. "This partnership will allow all Chicagoans to play a part in reducing violence that is plaguing our communities by investing in programs that work," Emanuel said.

Chicago isn't the only city experimenting with crowdfunding as a means of paying for city-involved projects. Some web sites have cropped up catering specifically to civic projects. The Alliance for Morris County Parks, in cooperation with the Morris County Park Commission, is building a playground for children of all abilities in Parsippany, N.J., and is using the civic-focused crowdfunding site neighbor.ly to reach its goal of raising $350,000. Tech Goes Home, which partners with the City of Boston, the Boston Public Library and the Boston Housing Authority, recently used Citizinvestor to raise $6,480 to train a class of 10 blind students to use iPads, Bluetooth keyboards and voice over software. Hillsborough County, Fla., currently is using the same site to fund prizes for its App-a-thon competition. The county is making data from numerous departments available to Tampa Bay's technology community and offering prizes for the best apps built using the data.

Local governments are using the "crowd" concept to harness community enthusiasm beyond monetary donations. This past year, Boston Mayor Thomas Menino launched Adopt-A-Hydrant, a program that allowed residents to volunteer to shovel hydrants out of the snow in their neighborhoods. Bostonians were asked to sign up at boston.adoptahydrant.org. "The Adopt-A-Hydrant program is the newest opportunity for our residents to show the great sense of volunteerism that shines in Boston all year, and it's a great example of how we can use technology to build community and keep neighborhoods safe," Menino said.