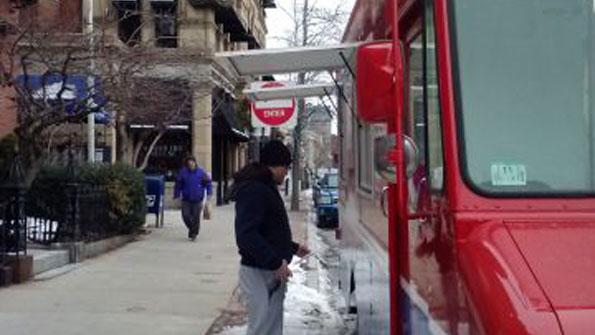 It looks like a food truck — those mobile food vendors common to many cities — but it isn’t. Instead, it’s Boston’s “City Hall To Go,” a city hall-on-wheels that travels to different locations daily to deliver street side services to constituents, according to The Atlantic.

The project began in December, patterned after the food trucks popular in Boston. The food truck theme is carried throughout, including the project’s slogan: “Convenience Served Fresh Daily.”

The truck’s “menu” comes in five categories of Car, Family, Home, Pets and Plus. City residents can pay parking tickets, property and excise taxes, register to vote, request documents like a birth certificate or a dog license, submit a service request, report problems and more. Residents can track the truck’s location on its Twitter feed and homepage.

The truck includes an Internet-ready office space. City officials are asking residents for suggestions on the kinds of services the truck should offer. They also plan to use the mobile city hall at civic events like block parties and neighborhood festivals.

The purpose, according to a statement from Boston Mayor Thomas M. Menino, is to “shake up the status quo in municipal services.” The mobile city hall extends city services and removes a long commute for residents who live far from the downtown city hall.

The idea for the truck, according to the Jamaica Plain Gazette, came as city staffers were brainstorming possible submissions for the Mayor’s Challenge, the national competition from Bloomberg Philanthropies offering $9 million in prizes to cities for creative problem solving and innovation in municipal government. Boston is among 20 finalists in the competition.

As it turns out, the mobile city hall was not among the ideas Boston submitted for the Mayors Challenge. But city officials liked the idea and decided to proceed with it.