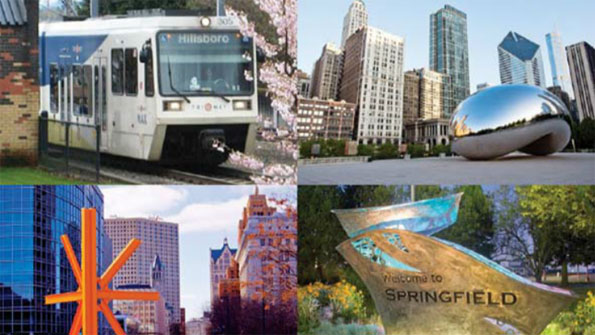 Naming of finalists narrows the competition for the $5 million prize awarded by Bloomberg Philanthropies.

A version of this article appeared in the December 2012 print issue with the headline: Rewarding innovation.

Twenty cities have been selected among 305 entries as finalists in the Mayors Challenge, an initiative of Bloomberg Philanthropies to generate ideas to solve major challenges and improve city life. A grand prize of $5 million will be awarded to the winning city in spring 2013, and four runner-up cities will receive $1 million each.

"We've always believed that cities are America's new laboratories of democracy, and this competition provides clear proof of the talent and creativity in city halls from coast to coast," said James Anderson, who directs the Government Innovation program at Bloomberg Philanthropies.

An "idea camp" held in November brought representatives from the Mayors Challenge finalist cities together to evaluate and fine-tune their ideas before submitting their final entries (by Jan. 31). "We didn't know what to expect but it was this incredible combination of inspiration and real-world tools we could use to refine our idea," said Niel Laudati, community relations manager of Springfield, Ore., who attended with three other representatives of the city.

Springfield's project seeks to lower the high costs of emergency medical services (EMS). A lower-cost alternative for non-life-threatening medical calls is a "mobile primary care delivery unit," proposed by Springfield, involving a home visit by a registered nurse in response to an EMS call. The nurse would examine the patient and use a system that provides the patient's vital signs and a video feed back to the hospital, where a doctor can also be involved remotely in patient care.

Milwaukee's proposal seeks to solve two problems common in many cities — the foreclosure crisis and the unavailability of fresh and healthy foods in some urban areas. Milwaukee's program would transition the city's 1,000 foreclosed homes and 3,000 foreclosed empty lots into resources to increase food security. Foreclosed assets would be transitioned to supply food, using urban farms, local kitchens and/or entrepreneurial processing facilities to address the food shortage. Matt Howard, environmental sustainability director for Milwaukee, says if the city wins the competition, the prize will be used as capital to attract additional investment in the program. "We want to tackle two issues at once — food insecurity and foreclosure, which are both destabilizing our neighborhoods," said Howard.

Chicago proposes a computer platform to promote faster decision-making by compiling and synthesizing data from a variety of municipal sources. Cities have more data than ever, but lack a means of understanding the data. "The [award] money would help us fund the building of the tool," said Michael Negron, Chicago's deputy chief of policy and strategy.

"Whether you win or don't win, these ideas are helpful as city governments tackle familiar challenges," Negron said.