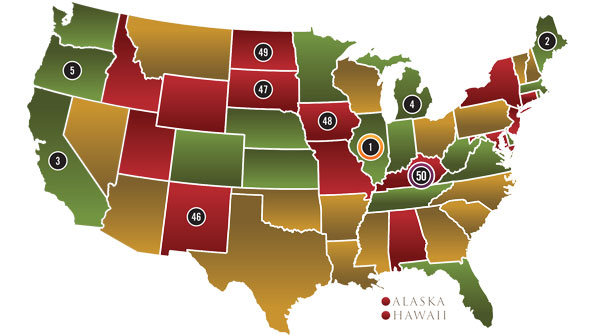 Kentucky has the worst animal protection laws in the country while Illinois leads the list of states with the best laws, according to a new report.

Kentucky has the worst animal protection laws in the country while Illinois leads the list of states with the best laws, according to a new report. The 2012 U.S. Animal Protection Laws Rankings from the nonprofit Animal Legal Defense Fund (ALDF) compared animal protection measures in all 50 states.

The seventh annual ALDF report analyzed more than 4,000 pages of state statutes. It tracked animal protection laws in 15 categories, including felony penalties available for animal cruelty, increased penalties for repeat abusers and whether courts can order forfeiture of abused animals and animals may be included in domestic violence protective orders.

States ranking lowest in the report, according to ALDF, have “extremely limited or entirely absent felony penalties for the worst types of animal abuse, inadequate standards of basic care for an animal and lack of ownership restrictions for those convicted of cruelty to animals.” For the sixth year in a row, Kentucky led the list of the “Worst Five” states, followed by North Dakota, Iowa, South Dakota and New Mexico.

Illinois led the “Best Five” states, for the fifth consecutive year. It was cited for strengths including a range of felony penalties for animal cruelty, increased penalties for repeat abusers and mandatory reporting of suspected animal abuse by some agencies and veterinarians. Other states among the top five include Maine, California, Michigan and Oregon. 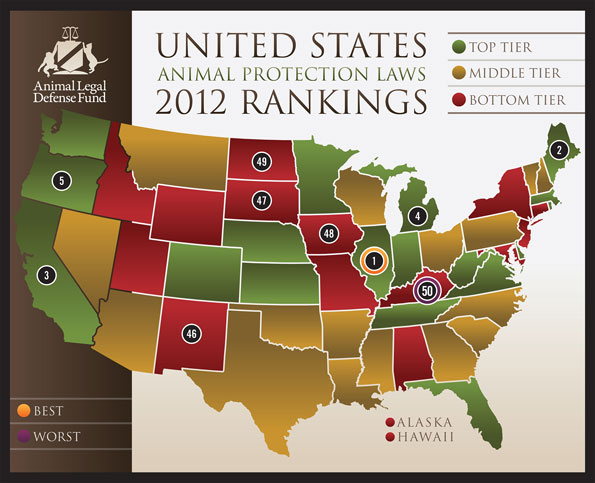 Since its first rankings report in 2006, according to ALDF, more than half of all states and territories have made significant improvements in animal protection laws. Still, said ALDF executive director Stephen Wells, “Regardless of ranking, each state and territory has ample room for improvement. We hope lawmakers will recognize the need for immediate improvement in animal protection laws across the nation. Although animals do not vote, those who love and protect them certainly do.”