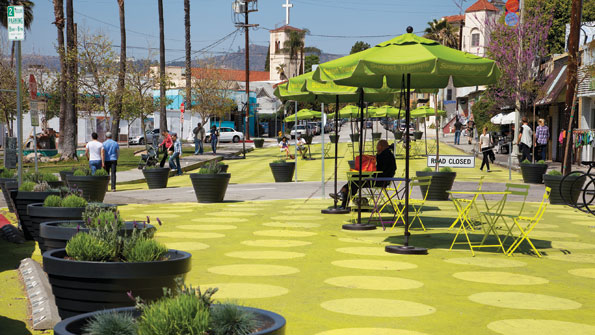 Turning Los Angeles into a more pedestrian- and bicycle-friendly city has been a time and budget challenge for city planners. In search of an expedient and cost-effective approach to the issue, the Los Angeles City Planning Commission and Los Angeles County Department of Public Health created Streets for People (S4P), a plan to transform nondescript rights of way and other underused spots into attractive public spaces.

City Planning Commission President William Roschen describes S4P as a way "to make great open space in a city that is amazingly park-poor." The plan has been a collaborative effort, involving a number of community groups in addition to the Departments of Transportation, Planning and Public Works and the Office of Councilmember Eric Garcetti.

The stakeholders worked with locally based design firm Rios Clementi Hale Studios to create Sunset Triangle Plaza, a year-long pilot project that will serve as a prototype for other S4P projects. The plaza, an 11,000-square-foot site in Los Angeles' Silver Lake neighborhood, was constructed for $25,000 and opened in March 2012. It encompasses the site of a former traffic island pocket park on Sunset and Griffith Park Boulevards and includes an expanse of adjacent roadway. A section of residential roadway has been closed to accommodate the plaza.

Next spring, the stakeholders will assess whether to make the plaza permanent and how to proceed in other locations. In the meantime, officials view the project as a model for turning as many as 40 underused spaces around Los Angeles into attractive green spaces each year.

This approach "allows us to recapture streets for people in months rather than decades, and for thousands rather than millions of dollars," Roschen says.