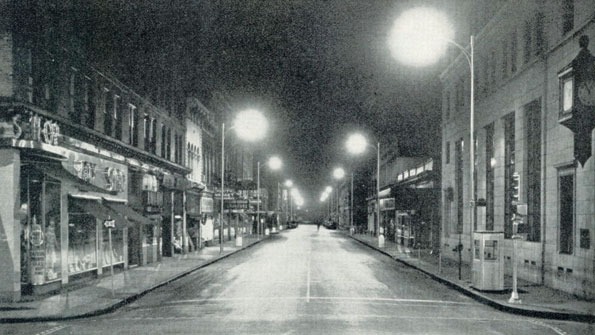 Dark streets are unsafe and unattractive, and as improved methods of outdoor street lighting became available in the 1950s, city leaders moved to deploy them. In the March 1951 edition of The American City, officials from Detroit to Philadelphia to Honolulu described programs to bring new light to their city.

In Philadelphia, officials installed more than nine miles of the latest mercury-vapor lights. They were the first street lights to be owned and maintained by the city, with most of Philadelphia’s street lighting at the time provided by a private company. The new lights illuminated streets near the Delaware River Bridge, the Philadelphia airport and a highway underpass considered “to be one of the best examples of underpass lighting in the United States,” according to an official with the city’s Department of Public Works.

Honolulu also installed 210 new mercury-vapor lights, which gave “three or four times as much effective lighting” as the incandescent lights they replaced, according to the city’s superintendent of street lighting. Eventually, officials planned to replace 10,000 incandescent lights throughout the city. 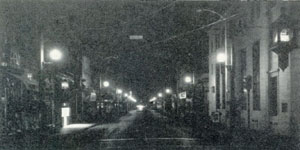 Roanoke, Va., officials were so impressed with the new mercury-vapor light that they provided The American City with before-and-after pictures to show the difference (see right and above). The pictures of the city’s business district reflect a marked improvement in available lighting. The city manager hailed the project as the “first large-scale application of truly modern white-way lights in the southeastern part of the country.”

Even small towns got in on the better lighting act. In the seacoast town of Nahant, Mass., officials replaced 63 gas lamps in a residential section with 61 more modern, incandescent lights. Some residents had fought to keep the old gas lamps, saying they gave the area a certain charm. But city officials said the lamps gave off such low light that it made the area dangerous for traffic and pedestrians. After the gas lamps were replaced, antique collectors “flooded the town with requests for the old lamp posts,” according to the magazine.