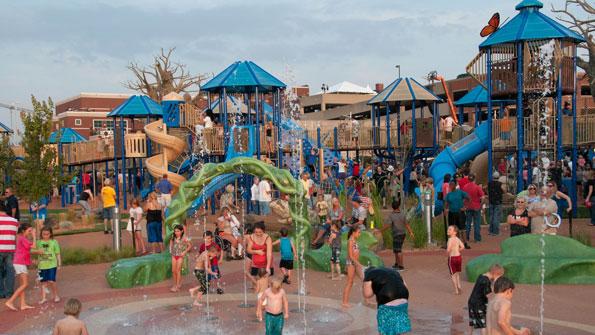 Recently, Owensboro, Ky., residents gathered downtown beside the Ohio River to spend an afternoon in Smothers Park, the city’s newest open space on its redeveloped riverfront. The 3-acre park complements several other recently constructed amenities in a popular area that 11 years ago was a blighted downtown district.

Since 2009, Owensboro has been implementing a master plan that called for focused investments in the downtown core to attract more residents and businesses. So far, nearly $100 million in improvements have been completed on the city’s riverfront, including construction of a river flood wall, the Mitch McConnell Riverwalk & Plaza, English Park Boat Ramp and Scenic Overlook, Riverfront Crossing and, most recently, Smothers Park.

Smothers Park, designed by Fort Lauderdale, Fla.-based EDSA, draws visitors to a children’s playground and outdoor museum, a spray park and a water fountain. It also is home to the Shelton Memorial, Owensboro’s tribute to the men and women of the armed forces. The park’s promenade, which spans five city blocks and includes space for special events, connects the RiverPark Center performing arts and civic center on one side with the Mitch McConnell Plaza on the other.