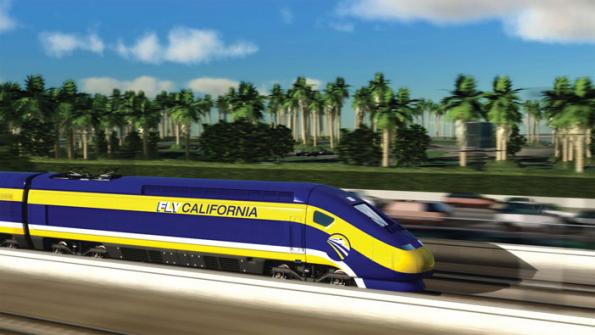 The state Senate approved starting the first 130-mile stretch of the controversial project on a narrow 21-16 party-line vote. No Republicans voted for the bill. GOP senators derided the “train to nowhere” project, which they said California, facing a severe financial crisis, could not afford.

The bill, which earlier passed the state Assembly, now goes to Gov. Jerry Brown for his signature. Brown and the Obama administration have argued for the bullet trains as a way to create jobs, ease traffic congestion and reduce air pollution on California’s crowded highways. Much of the money for the project comes from federal funds.

The new bill authorizes the state to begin selling $4.5 billion in voter-approved bonds as part of the funding for the first stretch of the line from Madera to Bakersfield. It also gives California access to another $3.2 billion in federal funding, which the state would have lost if the legislature had not approved the bill before adjourning last week.

Planners envision sleek, blue-and-yellow bullet trains traveling along the rail line at speeds as high as 200 miles per hour. Estimated travel time between Los Angeles and San Francisco: 2 hours and 40 minutes. But cost estimates to build the high-speed line have ballooned, and critics say the project’s future funding is risky.

Two cities have already announced that they've been victims of #cyberattacks. Read on to learn more →… twitter.com/i/web/status/1…

19th January 2020
Websites are now required by law to gain your consent before applying cookies. We use cookies to improve your browsing experience. Parts of the website may not work as expected without them. By closing or ignoring this message, you are consenting to our use of cookies.
X