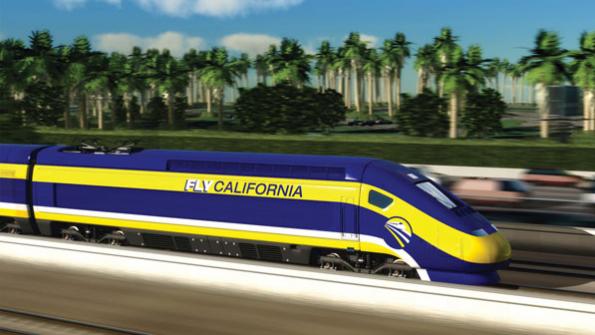 California project could signal the future for fast trains

Cities in Europe and Asia have long been connected by high-speed trains hurtling along at more than 200 miles per hour, but plans to build the fast trains in American cities have stalled. Projects in several states have been halted, and the most ambitious project, in California, faces problems.

That leaves California, under Democratic Gov. Jerry Brown, as the most high profile project still standing. The state’s plan for a first-in-the-nation high-speed rail network is widely seen as a test of the viability of high-speed rail in this country.

Planners envisioned a sleek, blue-and-yellow bullet train traveling along an 800-mile line. Estimated travel time between San Francisco and Los Angeles: 2 hours and 40 minutes. Supporters said the fast trains would shorten commutes and get air-polluting cars off the road.

But then, the California project went off the rails. Cost projections have soared from $45 billion to between $98 billion and $117 billion. The completion date for the first 130-mile section linking Fresno to Bakersfield has been pushed back 13 years to 2033. An auditor’s report in January said the project’s future funding was risky. That same month, the head of the state rail authority and the board chairman both quit.

The state is facing a Sept. 30 deadline to start construction on the rail line and keep $3.5 billion in federal funding. California voters approved $9 billion in state bonds as seed money, but the state legislature must approve selling $2.7 billion in bonds to begin construction.

Brown vows to press ahead, denouncing “declinists” urging Californians to “think small” and accept a future of traffic-clogged, polluted highways. Officials are mulling changes, including speeding up construction, to reduce costs. A new plan could go to the legislature this month.

But even former supporters, including Democratic lawmakers, now say they have doubts. Republicans have introduced measures to halt the project. Whether it proceeds or falters could indicate the future path for high-speed rail in California and beyond.