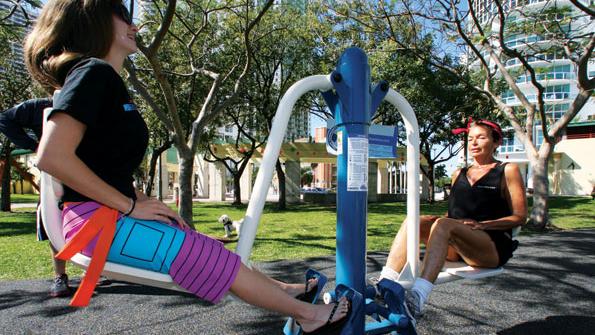 If your goal this year is to lose weight, the friendly folks at city hall want to help. From Newark, N.J., to Oklahoma City and numerous points in between, city officials are offering websites, tips and incentives to help residents get fit.

If your goal this year is to lose weight, the friendly folks at city hall want to help. From Newark, N.J., to Oklahoma City and numerous points in between, city officials are offering websites, tips and incentives to help residents get fit.

Four years ago, Oklahoma City Mayor Mick Cornett issued a challenge to his city: lose 1 million pounds. In January, Cornett announced that more than 47,000 Oklahoma City residents had met the challenge. “We’re a million pounds lighter,” Cornett said in a statement. The city’s website, OKC Million, was even more triumphant: “We lost the equivalent of 100 elephants!” Residents can go to the website to track their body measurements, food intake, blood pressure, exercise and other indicators. Cornett said the city built new sidewalks, jogging trails and bike lanes “to create an Oklahoma City that is designed for active people, rather than cars.”

Barringer High School beat out four other Newark schools to win the overall competition, with 619,000 total minutes moved. East Side High freshman Samantha Oliveira got individual first place honors, racking up exercise minutes by jumping rope and walking at a park near her home.

In nearby New York City, in 2010 officials released the 135-page Active Design Guidelines with detailed suggestions on how to construct buildings that encourage exercise and mobility, including making stairways attractive, according to The New York Times. The first building incorporating those guidelines opened last summer and includes a stairway with lime-green railways, wall art and piped in music, all to make taking the stairs inviting to residents.

Further south, Miami City Commissioner Marc Sarnoff was stunned in 2009 when Men’s Fitness magazine named his town the fattest city in America. Sarnoff used city quality of life funds to buy outdoor workout equipment for three parks in his district. “The only things I remember getting from government are garbage cans,” Sarnoff told CNN.com.