Army installation to get energy-saving makeover

The U.S. Army’s Fort Bliss will get a solar energy installation and other energy efficiency improvements that are expected to save the post $39 million in energy costs over the next 24 years. Johnson Controls won the federal contract for the Fort Bliss work. 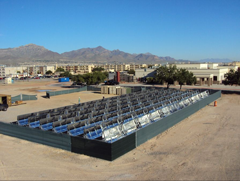 The U.S. Army’s Fort Bliss will get a solar energy installation and other energy efficiency improvements that are expected to save the post $39 million in energy costs over the next 24 years. Milwaukee-based Johnson Controls won the federal contract for the Fort Bliss work. The fort’s footprint covers parts of western Texas and New Mexico.

The nearly $16 million project, executed through the U.S. Army Engineering and Support Center in Huntsville, Ala., is the first initiative in response to President Obama’s directive calling on federal agencies to make $2 billion worth of energy efficiency upgrades over the next two years using Energy Savings Performance Contracting (ESPC). Go here for U.S. Dept. of Energy information on ESPC programs or here for Johnson Controls information.

Under the contract, energy efficiency improvements will be installed at Fort Bliss with no up-front costs to the government. The cost of the improvements will be paid for over time with energy costs saved on utility bills. Johnson Controls will guarantee the energy savings.

“I hope this is the first of many of these types of projects under an ESPC,” said Michael Norton, branch chief of the Energy Division at the U.S. Army’s Engineering and Support Center.

Under the Fort Bliss project, the Army will purchase the renewable energy produced by the 5,500 solar panels without owning or maintaining the equipment. In addition to the solar energy installation, the project will include new utility monitoring and control systemsto manage energy at 120 buildings, a program to reduce electricity use during peak demand periods and other improvements to make Fort Bliss more energy efficient. Together, the measures are expected to reduce greenhouse gas emissions equivalent to removing 1,280 vehicles from the road annually or planting 1,400 acres of pine forest each year.

“We hope to be energy efficient by 2015,” said Jean Offutt, the Fort Bliss Garrison public affairs officer. “Anything being done to support that initiative is good news for us.”

Johnson Controls has implemented, or is working on, more than 2,500 performance contracting projects with guaranteed savings of $19 billion.

Fort Bliss is the largest military installation in the Department of Defense. The facility is undergoing the largest expansion of any military installation since World War II. Spread across 1.2 million acres in West Texas and New Mexico, Fort Bliss is home to most of the 1st Armored Division and 26,000 soldiers, sailors, airmen, and Marines. Since 2001, more than 200,000 service members have deployed through Fort Bliss to operations in Iraq and Afghanistan.