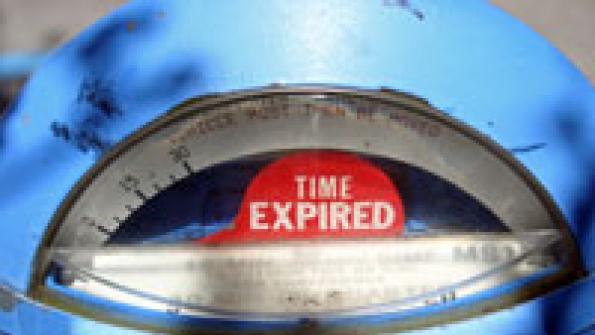 A mystery man paid a dime for his mother's 57-year-old parking ticket in York, Neb.

The 1950s were a simpler time, when parking tickets were so polite, and their fine so slight, that, apparently, they were a bit forgettable. Indeed, one of those tickets went unpaid — albeit framed on somebody’s wall — for 57 years, from its issuance on July 13, 1954, until its payment on Nov. 1, 2011, according to the York, Neb., News-Times newspaper.

Some of the details of the case remain obscured. Apparently, an anonymous man entered the York police station last week carrying the ticket, in a frame, as well as the payment for said ticket: one dime. The man said he’d found the ticket among his mother’s belongings as they cleaned out her home, according to the News-Times. He said his mother had been visiting York many years ago and probably lost track of the ticket and forgot it ever existed. The man then left without giving his name. “This was a pretty unusual thing, to see someone pay an outstanding parking ticket 57 years after the fact,” York Chief of Police Don Klug told the News-Times.

Klug also told the paper he found the wording on the ticket to be — unique. “We are sorry to have to leave this tag,” the ticket begins. “However, our parking space is so limited we have to divide it up. A charge of 10 cents is made for your extra time. You may enclose a dime in this envelope and deposit it in the red box located on the corner. We hope you understand our parking problem. Help us solve it, won’t you? Thanks! Come again!” It was signed, “York Police Department.”

The ticket was well preserved, Klug said, and he was glad for the antique frame in which it was mounted. “I plan to hang it on my office wall,” Klug said. “It’s just not something you see happen every day.”

Read the entire article at the York News-Times.