For decades, the South Street Bridge linking West Philadelphia neighborhoods to Center City desperately needed repair, but its renovation was mired in politics and neighborhood wrangling. In 2006, the newly elected mayor was determined to fix the bridge. 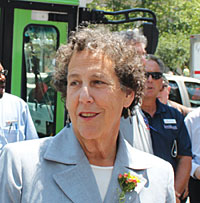 For Mayor Michael Nutter, the question was not how or when the bridge was going to be rebuilt, but who would be the right project manager to lead the city through the sticky neighborhood issues and agency conflicts. As far as he was concerned, Rina Cutler was exactly the woman for the job. “Rina drove the whole project,” Nutter says. “She managed the process. It was very complicated, but Rina stood tall, cool and calm.”

Today, completed on budget and a month ahead of schedule, the bridge finally stands anew — and as a model of design and convenience for motorists and bicyclists alike. “When it reopened in November 2010, it was a wonderful moment for Philadelphia, a reminder how great a city can be,” Nutter says.

For Cutler, overcoming obstacles that had stymied others for two decades was just another notch in a career that has been marked by remarkable achievements. For her outstanding work on the South Street Bridge and a host of other accomplishments, Cutler has earned American City & County’s recognition as the Public Works Leader of the Year for 2011.

‘She gets things done’

As Philadelphia’s deputy mayor for Transportation and Public Utilities, Cutler guided the city through an extraordinary year that ranged from the monumental, like the South Street Bridge project, to the exotic, like the installation of solar-powered compacting litter baskets from Newton, Mass.-based BigBelly Solar. But through it all ran a consistent theme of change and improvement.

“She is someone who changes culture,” says former Gov. Ed Rendell, who hired Cutler twice, first when he was mayor of Philadelphia and, again, during his tenure as governor. “Rina takes no prisoners. She is a very direct and forceful administrator and leader. She’s entirely honest and blunt. She gets things done.”

In nominating Cutler for the Public Works Leader of the Year award, Nutter noted that she had assumed her role during one of the worst recessions that the nation has ever seen. “Cutler pushed her departments to do more for city residents by being innovative in their efforts to make Philadelphia a more livable and vibrant city,” he wrote.

“Over the last 18 months, we have seen the results of those efforts,” Nutter continued. “Through her vision and leadership, Cutler has helped transform Philadelphia into a greener city, a more traversable city, and a more beautiful city while reducing costs and improving efficiency in her departments.”

In her position, Cutler has overall supervision for 4,660 employees, an $800 million annual operating budget and more than $5.6 billion in capital projects. Among her responsibilities are the streets department, the Philadelphia Water Department and Philadelphia International Airport.

In supporting the nomination, Nutter cited numerous successes, in addition to the South Street Bridge project, which included: 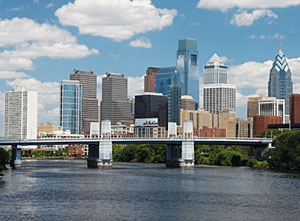 Other key officials who have worked with Cutler share Nutter’s enthusiasm for the deputy mayor, who began her career in Boston and moved to San Francisco before going to work for then-Mayor Rendell at the Philadelphia Parking Authority in 1994. At the time, Rendell says, the department was “a patronage-laden organization, filled with political hacks.” Cutler, he says, “revolutionized the Parking Authority.”

When Rendell became governor, an audit landed on his desk that challenged the purchasing system he inherited and made clear that it needed to be changed across state government. At the Pennsylvania Department of Transportation (PennDOT), Director Allan Biehler turned to Cutler to revamp the department’s purchasing practices. He says she was persuasive in convincing veteran administrators to adopt a new, more efficient system to replace the one they had used for many years.

As PennDOT’s deputy secretary for administration, Cutler supervised a department of 12,000 people, a computer system that managed 30 million transactions a year and a procurement system that fed $1.5 to $2.5 billion per year into construction projects. “Rina was phenomenal,” Biehler says. “She has great organizational skills that are able to get the workforce going in the same direction. She offers clear assignments in what she wants people to do.”

As do others who admire Cutler, Biehler notes that she is determined and forceful in promoting change, but also ready and willing to hear the thoughts of others on how it can be adopted most effectively. “She has a solid understanding of the issues and is eager to enlist support for the projects, to change the practice,” he says. “She looks for good ideas, but when she needs to be tough, she absolutely is tough. She wants what’s good for meeting the goal.”

Business leaders who have worked with Cutler also are supportive of her ability to reach out to diverse interests to reach a consensus, while keeping the long-term in mind. Suzanne Boda, a senior vice president for Tempe, Ariz.-based U.S. Airways, who has worked with Cutler on improving Philadelphia International Airport, says that Cutler is a visionary. “Rina sees beyond how things are today that others may think are an impossibility,” she says. “But then, she works on a plan that is attainable.”

Boda cites work that Cutler managed that led to improvements at the airport commuter terminal, which is important to the operations of U.S. Airways. She says that Cutler sought out the opinions of the various interests involved in the project. “She worked through all the plans,” Boda says, “but once it was all agreed upon, she moved to execute it, within the cost structure that we could afford.”

‘She listened to all opinions’

Many point to Cutler’s work on the South Street Bridge project as a prime example of her ability to manage bureaucratic resistance and neighborhood involvement to design a project that was acceptable to everyone and exceeded expectations in the end. The project had been funded for almost 20 years but could not make headway because of squabbling. Yet, everyone knew that the key connector between the Center City and a vibrant area of the city had to be renovated. It was falling apart, and the weight of trucks allowed on the bridge was reduced several times.

In addition to the challenge of designing the bridge to meet the needs of a newly vibrant community, the project itself created difficulties, because the bridge had to be closed throughout construction — for two years. Few believed that the project could be completed without significant disruption, and many feared that it would drag on for years. Yet, the whole process was completed a month early.

“Everybody had something to say,” Nutter says. “She listened to all opinions and created a better project and a better bridge. We had 1,000 people attend the opening of the bridge. It was an uplifting moment.”

For her part, Cutler views her role as an agent of change, while remaining a leader who brings a concern for the average person into the conference room. She attributes her perspective to her atypical background. She was trained as a social worker — not as an engineer.

“I was managing a human services program in the city of Boston, and the mayor [Raymond Flynn] needed a manager in the transportation department,” she recalls. “I didn’t know anything about transportation, but I knew I could manage. I soon understood that folks in the department didn’t realize that they were in the people business, not the transportation business. They actually have customers. I tried to bring a perspective like that to the agency.”

Throughout her career, she says she has tried to retain that “consumer perspective rather than as an engineer or a planner.” “I have also tried to instill an attitude that the objective of planning is action, not planning,” she says. “Sometimes, it seems that it takes forever to get a project done.”

Cutler balances the needs for action with the need for residents to participate in project planning. “I understand that community engagement is a crucially important part of the process, and that a successful project needs a partnership,” she says.

‘We need to be visionaries’

However, she knows that engagement has limits. “At some point, I grow tired that this must be a completely consensual process,” she says. “When it comes time to make a leadership decision, I am prepared to make it.”

She says that what success she has achieved has been through the understanding of the leaders for whom she has worked. “I’ve been amazingly blessed,” she says of the mayors and the governor that hired her. “They understand that transportation has a huge impact on economic development and that its work touches every single person in a community.”

There is no better example of the impact of transportation than the South Street Bridge project, which had deteriorated so badly that it was not safe for plows to keep it clear during snow storms. “Here was a case where we had the money but couldn’t get the project over the goal line,” she recounts. “I realized that in the 20 years since the project began that the entire neighborhood had completely changed, but there had been limited neighborhood involvement.

“So, I went to the neighborhood and said, ‘This has to be done by date X. We can’t widen the bridge. Here’s the money we have. What do you want to do within those constraints?’ And the community rose to the challenge.”

Along with the bridge, she is particularly pleased with the mural that now adorns the parking garage at the airport. It was a concept born while she was stuck in traffic one day on the highway passing the airport. “I envisioned that this can be a gateway into the city,” she says.

Cutler recruited local dance companies and a local artist to create a mural that captures movement while also portraying unique aspects of Philadelphia culture. One columnist called it “the grandest mural of all” among Philadelphia’s 3,500 murals.

Not one to consider the job completed, Cutler is now planning for a $6.4 billion airport expansion, which would include expanded runways and a new people-mover system. Cost is an issue, of course, and negotiating with the airline partners is a challenge. But that has not stopped Cutler.

“We need to be visionaries,” she says. “We need to say that we should do this. It’s time to move the ball down the field.”