American City & County readers say, if there is another federal stimulus, it should go to local governments. 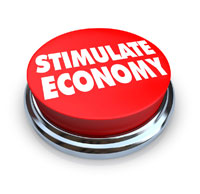 In testimony before the Senate Banking Committee in June, Chairman of the Federal Reserve Ben Bernanke initially gave indications that the Fed may be willing to implement another round of bond buying to stimulate the economy. He later tempered his comments, saying there are no current plans to implement another round of quantitative easing. American City & County asked the readers of its weekly e-mail newsletters if another federal stimulus is approved, should it be quantitative easing, or should more money be sent directly to local and state governments? Below are some of the responses.

“The part of the original stimulus that was short changed was the [Works Progress Administration]-type infrastructure projects. This kind of a program addressed two critical issues simultaneously: 1) it put people to work, both in the public sector and the private sector; and 2) it addressed infrastructure improvements. The nation’s infrastructure is wearing out. Providing money for projects that improve the capacity of roads, bridges, transit systems, airports, rail lines, ports, water systems and sewer systems will enhance the nation’s competitive position for generations to come. People will be employed not only on job sites but in the industries that supply the materials for these improvements. To be an effective stimulus, timing is the critical issue. Projects that are ‘shovel-ready’ need to be at the top of the list — we need jobs now, not two, five or 10 years from now. We can’t wait for an excellent project to work its way through the approval process. We need to invest in projects that put to people to work starting NOW, in 2011. The only question I have is: Why did Washington wait? Funding for infrastructure improvements was reduced in the original stimulus package. Thousands of additional jobs could have been created early in the recession, when they would have done the most good.”
— Jon Eich, chairman, Centre County, Pa., Board of Commissioners

“The first round of stimulus funds were a disaster. Government entities that have real needs are not going to have ‘shovel ready’ projects. Not many entities can afford to pay for planning and designs to sit on the shelf. Anyone who has ever worked with government programs knows that from design to construction takes more than 120 days. The environmental portion [alone] is a minimum of 90 days. If there is a second round, it should be for social programs and facilities at the local level. Social programs and public facility programs have been taking budget cuts for many years. If cities had funding to provide the communities with support through programming and facilities, perhaps the many teachers in our state who have lost jobs can find new callings in social programs.”
— Jessica Garza, city administrator/clerk, Vinton, Texas

“Seeing as the documented results of the [federal] stimulus program have yet to be fully identified and vetted, and the amount of unspent [dollars] in some areas, like broadband extensions and [electronic medical records] for health care providers, is significant, I think it wiser for Washington to ask agencies for their [five-year] plans like the [Federal Aviation Administration] has for airports. [Washington should] look to make a commitment to address infrastructure needs on a common, sound basis that nationwide starts to make real progress on the aging roads, bridges, water and sewer plants, and transmission lines, along with combined sewers. [The federal government should] make long-term funding commitments, not political pork rendering on priorities and deficiencies that would be as effective and employment-friendly as any out-of-context/politically motivated stimulus package has been [or] will be. The connotation of another round of [stimulus money] or ‘new’ debt, when we can’t even get [Washington] to agree on the current debt level ceiling, is almost dead upon getting to the gate. As [the United States] stops wasting [money] on police actions in Iraq and Afghanistan, and on unwanted new weapons that even the military is saying ‘no thanks’ to, this country and its alleged political leaders must refocus on our domestic problems. [We must] stop the partisan bickering (which seems unlikely as long as Republican candidates to challenge [President Obama] in 2012 are now as numerous as tribbles on the Starship Enterprise) and hold [elected federal officials’] collective feet to the fire of being part of the strengthening of our economy, recapturing the technological advantage, retraining and redeploying our mature and emerging workforce, and stick to a plan of action that all reasonable adults can agree to and not bankrupt us in the process.”
— Jay Gsell, county manager, Genesee County, N.Y.

“The last stimulus did very little to help small communities. Small towns don’t have full-time planners to produce plans for shovel-ready projects. If there is another stimulus, money should go directly to local [governments] based on population. I believe the best stimulus would be to eliminate out-of-control spending on the state and national level.”
— Charlie Hilmes, mayor, Breese, Ill.

“My opinion is that if there is another round of stimulus, the money should be sent directly to the local and state governments. Locally, we know what is needed and how to use the money to make money and create jobs.”
— Trish Nuskievicz, assistant director, Trumbull County, Ohio, Planning Commission