Public-private partnerships are being used as a tool to help governments balance their budgets, and ARRA funding is helping pay for a road and bridge project in Marion, Ohio — all in the the second-half 2011 Keating report.

Public-private partnerships (P3) are coming to the rescue as states and other governments wrestle with fiscal crunches. P3 agreements give governments the money they need to rehabilitate infrastructures, improve transportation, construct new facilities and finance other projects they cannot afford.

P3 activity “will accelerate dramatically in the last half of 2011,” says Frank Rapoport, a senior partner and chair of the Global Infrastructure and Public-Private Partnerships practice at the Washington-based McKenna Long & Aldridge law firm. “New states will emerge with legislative authority to conduct P3s with state infrastructure assets, including Ohio, Indiana, Pennsylvania, Connecticut and perhaps New Jersey and New York (although probably following in 2012),” he says. “Other states (and municipalities) including Georgia, Virginia, Texas, Florida and California have P3 deals in the works involving new high occupancy/toll lanes, new bridges and even social infrastructure like courthouses, state office buildings, jails, and stadiums. All of this will mean more work for the construction and engineering industries.” 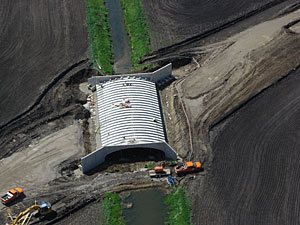 A CON/SPAN bridge system from West Chester, Ohio-based CONTECH Construction Products is being installed in the project. Precast headwalls and wingwalls are being used to provide stream crossings with a natural bottom. CON/SPAN’s system was chosen for the project because of its clear span, economical design and quick installation.