Rescue at the wastewater plant 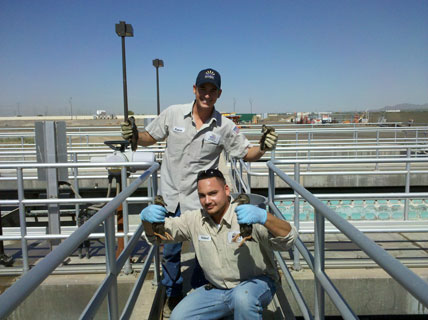 Goodyear, Ariz., Wastewater Reclamation Facility utility technician Art Martinez took this photo of fellow technicians Ricky Delgado (kneeling) and Aaron Dougherty holding some ducklings they rescued from a clarification basin at the facility in June. There is a large storage pond at the facility where ducks and other birds like to congregate, and because of the warm temperatures in early June, several ducklings looking for cooler water ended up in the water clarification basin, which is filled with scum and debris. Fearing their demise, Delgado and Dougherty used a net and trash can and were able to rescue almost all of them,” Goodyear Executive Management Assistant Elaine Schmerbeck says. “After cleaning them up, the technicians released the ducklings back into the pond where their mother was anxiously waiting.”