Defying the possible wrath of both art lovers and the heavens above, officials in Encinitas, Calif., have decided to evict the Virgin Mary. And she has to take her surfboard with her. 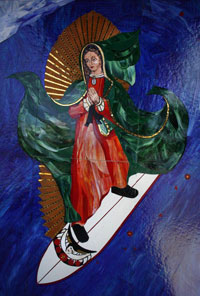 Defying the possible wrath of both art lovers and the heavens above, officials in Encinitas, Calif., have decided to evict the Virgin Mary. And she has to take her surfboard with her.

On May 19, the Encinitas City Council voted to remove a stained-glass mosaic that portrays Our Lady of Guadalupe surfing a wave next to the slogan, “Save the Ocean,” otherwise known as the “surfing Madonna,” according to the Associated Press (AP). Guerrilla artists installed the 10-by-10-foot mosaic under a train bridge in the city, which is a well-known surfing spot, before Easter. The council also approved a $2,000 study to determine how the piece can be removed without damage. “The mural was conducted and placed illegally without benefit of a public vetting process for gifting of public art and creates issues such as violation of Encinitas Municipal Code,” the council says in a statement on the city’s website “The city has received numerous comments on the mural, many who like the work and others who are offended by its presence on public property.”

Because it didn’t have a public review process, the mosaic is legally considered graffiti. Council members say they personally like the piece but allowing it to remain on public property sets a bad precedent.
Some local businesses have offered to give the Madonna a home, and several “Save the Surfing Madonna” Facebook pages have been created.