Newark, N.J., photographer Anthony Alvarez took this photo of Congregation Ahavas Sholom Rabbi Simon Rosenbach lighting the Candle of Remembrance in honor of the victims of Nazi persecution during the city's 24th Annual Holocaust Remembrance event on May 4. 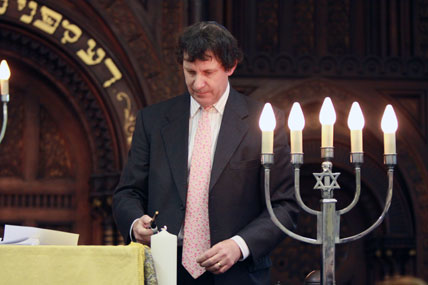 Newark, N.J., photographer Anthony Alvarez took this photo of Congregation Ahavas Sholom Rabbi Simon Rosenbach lighting the Candle of Remembrance in honor of the victims of Nazi persecution during the city’s 24th Annual Holocaust Remembrance event on May 4. The event took place at Congregation Ahavas Sholom, home of the New Jersey Jewish Museum and Newark’s oldest continuously operating synagogue. “God did not make man in His image so that some men could take it upon themselves to remake those men made in His image into a different image, the image of Nazis, Serbs, or Hutus,” Rosenbach said as he gave the invocation and lit the candle. “So, we ask God to imbue all of the world’s people with the tolerance to accept neighbors who are different.”