Some officials in Florida are calling for the state to repeal the death penalty, just as 15 other states have done. 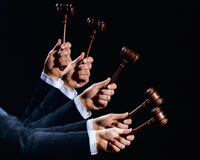 This month, Illinois became the 15th state to repeal the death penalty, citing concerns that the system does not prevent innocent people from being wrongly convicted and executed, as well as the high costs of carrying out the penalty. Florida, which has more people on death row than any state other than California, also has had the most people exonerated from death row — 23 people since 1973 — and a 2000 study found that the state would save $51 million a year by punishing all first-degree murderers with life without parole instead of death.

Those numbers have prompted some to call for Florida to consider abolishment or reform, although the Florida legislature does not have any pending legislation regarding the death penalty at this time. Since capital punishment was reinstated in 1976, Florida has executed 69 people. However, those executions cost $24 million each, according to an estimate given in a 2000 article from the Palm Beach Post. The only way to cut costs is to either limit which people can receive the death penalty, or eliminate it altogether, says Terry Lenamon, a Florida criminal defense attorney with 15 years of experience working with capital cases. “It’s not cost effective,” Lenamon says. “Florida has about 400 people on death row, and we execute one, maybe two [inmates], per year. Cost is a big issue.”

The costs in a capital case include the two separate trials (one for the guilty/not guilty verdict and one for sentencing), the jury and jury selection, the counsel itself, and the experts necessary to build the cases. “Everyone is lacking resources,” says Jenny Greenberg, assistant executive director of the Florida Capital Resource Center, which provides resources to facilitate the defense and mitigation of capital cases. “The defense doesn’t always get what they need to put together a meaningful defense.”

A meaningful defense is constitutionally necessary, and the high number of post-conviction exonerations emphasizes the practical need to provide competent representation for suspects in capital murder trials, Lenamon says. The money to cover those costs comes from the taxpayers. “The state has to provide the defendant with adequate experts and attorneys,” Lenamon says. “If we’re going to kill, these people need to be represented by the best lawyers with the best resources.”

Despite the high costs of death penalty trials, Bill Cervone, president of the Florida Prosecuting Attorney’s Association, says the legislature is unwilling to consider repeal of the death penalty, because the policy is thought to be “appropriate and consistent with the wishes of Florida citizens.” “The United States Supreme Court has ruled that the death penalty is lawful and constitutional,” Cervone said. “Some crimes are so terrible that death is an appropriate sanction.”