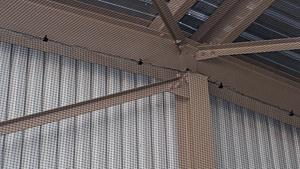 Newport Beach, Calif., recently had its hands full with a pesky bird problem. The city sought help from Antimite Termite and Pest Control to rid pigeons and sparrows from a maintenance yard.

Editor’s note: Governments are tasked with bird control as part of their pest management efforts. Birds, their droppings and nesting materials can cause health risks to humans and create other problems on public buildings and grounds. The following is the first of a two-part series on bird control in local and state government. The first part shows how the California community of Newport Beach developed a bird control program in a maintenance yard.

The second part has advice from Cameron Riddell for local and state government officials on how and where to start if their community or facility has a bird problem. Riddell is president of Carson, Calif.-based Bird Barrier America, Inc., an inventor and manufacturer of bird repellent products. — Michael Keating

Newport Beach, Calif., recently had its hands full with a pesky bird problem. The city sought help from Chino Hills, Calif.-based Antimite Termite and Pest Control to rid pigeons and sparrows from a maintenance yard, where it houses and repairs garbage trucks and other service vehicles and equipment. Keeping the property free of birds was difficult because of the open nature of the building; birds roosted on beams supporting the warehouse ceiling, and left droppings and nesting materials on the trucks and gear below. 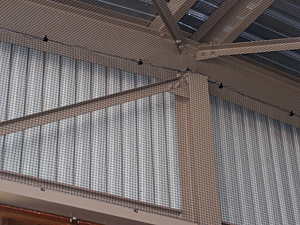 City employees were complaining to their supervisors about bird droppings on the equipment and surrounding floor — and none of them felt comfortable picking up equipment from the storage facility. Aside from damaging morale, the excessive bird droppings damaged the surfaces of the vehicles and equipment, and created an unhealthy work environment.

“Trash trucks, and the resulting amount of edible debris, are, not-surprisingly, a huge attractant for birds,” says Antimite Pest Control’s Jack Kurtzberg, a 24-year industry veteran. “Why would the birds want to leave? It makes our job very challenging, as we know we have to implement solutions in which the deterrent is even stronger than the attractant.”

The city asked for Antimite Pest Control’s help because the company had successfully bird-proofed the maintenance yard in the past. After some recent remodeling, new sections of the facility required treatment to prevent pest birds from roosting and nesting. “The municipality was proactive; their remodel budget included bird-proofing for the new structure,” explains Kurtzberg.

Netting was one tool the city used to bird-proof the facility, says Mark Harmon, director of the Municipal Operations Division for the city. “When we had the new roof installed, we replaced the netting. It was quite old.” He estimates the cost of the netting at about $6,000, which is a small percentage of the division’s operations budget. The netting, says Harmon, has effectively prevented the birds from roosting and dirtying the service vehicles below.

Kurtzberg surveyed the situation and chose StealthNet, a bird exclusion net product from Carson, Calif.-based Bird Barrier. Because the Newport Beach structure is open on the sides and prone to ongoing pest bird issues, the solution needed to permanently exclude birds from unwanted areas while not harming them.

The Antimite team of four installers mounted perimeter cable around the inside of the warehouse and along the beams to support the ¾-inch black StealthNet. “The most difficult aspect of the job was gaining access to the areas that required netting. A chain link fence separated one section of the building. There were also supports that extended up to the ceiling, around which we had to install the net,” says Kurtzberg. “We used scissor lifts for access.” The project took 100 man-hours to complete, and the netting will last a decade or more.

Kurtzberg explains that bird proofing is not for the meek. “It requires knowledge of seasonal bird nesting and migration patterns and species-specific behavior patterns as well as the day-to-day work demands of the area to be netted. Each job is custom; proper products and installation techniques are chosen with an expert eye to create one-time, 100 percent solutions.”

Before crews installed the netting, the city would devote as many as 100 hours each month cleaning bird droppings off equipment and surrounding areas. The continuous cleanup efforts were costly in time, cleaning chemical expenses and worker morale. Risk of disease and other safety risks were also a concern when cleaning up after the birds.

The city is satisfied with the bird-control solution and has asked Antimite to bid on another pest control project at the same site. Now that the maintenance yard bird problems have been solved, Harmon’s team at the Municipal Operations Division can focus on other Newport Beach challenges.