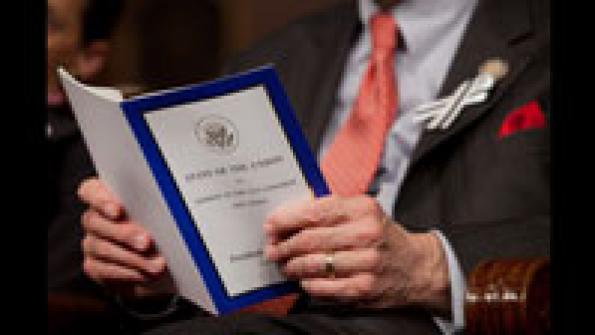 President Obama's plans to improve the nation's infrastructure to create jobs, which he outlined in Tuesday's State of the Union speech, inspired endorsements from several government associations.

Obama’s plan to fund more work to restore the nation’s transportation, electric and broadband infrastructure, which was also the focus of his American Recovery and Reinvestment Act (ARRA), drew support from T4America and AASHTO. Along with the actual construction work involved in transportation projects, Obama said in the speech, jobs would be created by developments surrounding the projects. “We were thrilled to hear the president come right out and say that investment in transportation and other infrastructure is central to rebuilding and growing our economy,” said T4America Director James Corless. “An upfront investment in the most needed, clean transportation projects is a great opportunity to create near-term jobs and lay the groundwork for the future economy.”

AASHTO Executive Director John Horsley said his organization would press Congress to pass a new transportation authorization bill this year. “We continue to be encouraged that President Obama supports investing in America’s transportation infrastructure — recognizing the role it plays in creating jobs, growing the national economy and balancing the federal deficit,” Horsley says. “The president understands that America needs a sustainable federal transportation program that helps state departments of transportation modernize and maintain our nation’s transportation systems, and creates jobs during a critical moment in our nation’s economic recovery.”

APWA also called for the passage of the transportation bill in support of Obama’s infrastructure improvement proposals. “All segments of the economy, whether businesses, services or manufacturing, rely on efficient, well-maintained infrastructure to move commerce, create jobs and strengthen our economic competitiveness,” says APWA President George Crombie.

NLC President and Charlotte, N.C., Councilman James Mitchell called for restraint in the cuts that are expected to be made in the federal budget as Obama and Congress struggle to lower the nation’s debt. “The president’s call for a freeze on discretionary spending underscores the difficulties of the nation’s current economic conditions,” he says. “But, budget cuts and freezes must be made responsibly; they should not come at the expense of proven federal investments like the Community Development Block Grant Program and federal transportation programs that have helped keep our communities competitive.”

Obama’s call for more investment in green energy must involve local initiatives, says North Little Rock, Ark., Mayor Patrick Hays, ICLEI USA’s corporate president. “We applaud [Obama’s] challenge to produce 80 percent of America’s electricity from clean energy sources by 2035, as well as having 1 million electric vehicles on the road by 2015,” Hays says. “As the president looks to win the future, we call on him to recognize and support the nation’s vast network of clean energy innovation factories — our local communities.”

Read the statements from NLC, T4America, APWA and AASHTO.