Worldwide sales of GIS/geospatial software, services and data totaled $4.4 billion, and grew an impressive 10.3 percent in 2010, according to Daratech, a research firm that tracks GIS/geospatial market dynamics.

“Demand for GIS/geospatial products is driven by an increasing global need for geographically correlated information,” said Charles Foundyller, Daratech’s CEO. “As more and more websites, such as Google Earth, and consumer navigation systems, such as TomTom, bring awareness of the power of linking business and consumer information with their geography, geo-enabled apps will become the norm.”

GIS data is the fastest growing segment of the GIS/geospatial business. GIS data has grown at a compound annual rate of 15.5 percent for the last eight years – — about twice the rate of growth for GIS/geospatial software and services. “GIS data is to GIS/geospatial apps what software is to computers,” said Foundyller. “Without it, GIS/geospatial apps have nothing to tell us.” As more location-related data becomes available, the use and scope of geospatial analyses is likely to grow dramatically, according to Daratech estimates. 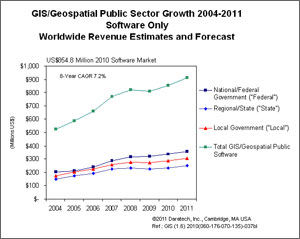 Sales to all government entities worldwide have grown at a 7.2 percent compound annual rate over the last 8 years, according to Daratech estimates. “We should see stepped-up government purchases of GIS/geospatial technologies in the next few years to handle all the additional images and data they are collecting,” Foundyller says .

Local government spending on GIS/geospatial technology has traditionally outstripped spending at the state and regional levels, say Daratech analysts. The spending is driven by the need for cities and counties to manage property information and other municipal assets. State government spending has been more modest, Daratech notes, because there are fewer state and regional entities, and they tend to have fewer assets to track and monitor.

Daratech’s GIS/Geospatial Market Report is available for purchase at the company’s web site.