Centennial, Colo., has created a flexible system for outsourcing its public works services.

To keep the system flexible and easy to manage, the city uses an intricate system for assigning value to each public works task, detailed record keeping and independent audits. Although outsourcing public works, as well as many other city services, allows Centennial to operate with only 53 employees, it is not the only option officials will consider to meet residents’ expectations, which keeps internal staff and contractors competing to offer high levels of service.

Contracting from the start 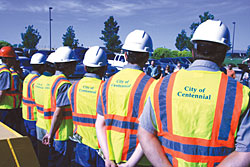 Located southeast of Denver in Arapahoe County, Centennial incorporated in 2001 in an effort to keep neighboring Greenwood Village from annexing its commercial corridor. Because special districts in the area already managed library, recreation, fire and water services, the new city’s two largest services would be public safety and public works. “We really didn’t have to provide a lot of services, so we could keep our taxes low,” says Randy Pye, the city’s first mayor. “The way to do that is to take services and not make it a government bureaucracy, but instead privatize those services.”

The city requested proposals from private firms, and it prepared its own estimate for an in-house public works department. “We worked for two months just creating a request for proposals, working with the county staff to identify the actual service provision, get all of the units and measures and cost per unit, and those measurable inputs that we could define to create the level of service we were currently getting from the county,” says City Manager Jacque Wedding-Scott. “That would be our baseline going forward.”

Centennial would assume some risk in the contract by purchasing all fuel, asphalt, deicing chemicals and road salt needed for the department’s operations. That removed some cost uncertainty for the private firms so they could focus their proposals on the costs of providing the expected services. “We also decided we did not want them to ever have any incentive to minimize the amount of road salt or chemicals they would put on the roads,” says Public Works Director Dave Zelenok.

Three firms submitted proposals for the contract, and their costs were comparable to the city’s estimate for an in-house department, but the level of services the private firms could provide exceeded the city’s ability for the same cost. “When we looked at the entire spectrum of in-source versus contract the entire thing out, the choice was very clear that the best service delivery model was an outsourced private-sector model,” Zelenok says.

On July 1, 2008, Centennial launched the public works department through a public-private partnership with Denver-based CH2M HILL. The five-year contract includes transportation and traffic engineering, infrastructure maintenance and snow removal. Centennial retains direct control of public works operations, and the company operates as an extension of the city.

The contract is designed to be flexible and adjustable through a value exchange system the city developed that assigns values to all public works services. Sweeping 30 miles of streets has a certain value, replacing five road signs has a certain value, as does paving a number of miles of roads. The contractor updates the costs of those services each year when the contract is reviewed, and the city decides how much of each service it wants to provide for the next 12 months. If quantities of services need to change, they can be exchanged for the same value of services elsewhere. “For example, [repairing] five stop signs equals 30 miles of street sweeping,” Zelenok says. “We can choose not to do five stop signs, and we can trade that in for 30 miles of street sweeping.”

The system establishes clear service expectations for both parties, and it keeps the contract from becoming a nightmare of change orders. “I knew I didn’t want to spend endless hours negotiating small change orders to a contract, so we devised this system,” Zelenok says. “We get to pick how much of what we want. The contract is highly flexible, so we’ve not needed a single change order to date because of the highly flexible model.”

The value system proved useful last year when the city had to cut budgets as a result of decreased revenue. Centennial officials asked the public works contractor to cut costs by 5 percent for the year, and they pledged to make them whole in future years. The contractor proposed reductions in services, such as sweeping fewer miles of road, to make the adjustments. “We reduced desirable but not critical services to the tune of about a half-million dollars for 2010,” Zelenok says. “We used that value exchange system and implemented a painless reduction in services.”

Zelenok sees one of the benefits of the arrangement in the contractor’s flexibility in staffing. When heavy snow needs to be cleared from roads, the contractor can call on additional staff and other resources to deploy plows and salt spreaders easier than the city could on its own. In spring and summer, those employees can be deployed elsewhere. “We on the government side have been released from the need to manage employees themselves,” Zelenok says. “We set the performance standards, and they manage the number of employees.”

To help ensure the contractor is doing what it says it will do, Centennial contracts with Aurora, Colo.-based Merrick & Co. to independently audit public works services. Several times each year, the auditor will pull fleet vehicle records, check material inventories and inspect completed work, comparing them to the contractor’s service reports. “It costs less than 1 percent of the public works contract amount, but it’s extremely valuable,” Zelenok says.

Centennial’s public works contract includes a 24-hour, seven-day-a-week call center that serves as a single point of contact for any and all residents’ questions and work requests. “We knew we wanted some public works call center services,” Zelenok says. “We asked initially for Monday through Friday, somebody at the phone taking pothole complaints. What we found they were bringing in at no additional charge, which was part of the overall package, was this highly sophisticated system that includes feedback, quality assurance and quality control.”

Residents can call the center with any type of request — not just for public works — and the call center representatives log the information into a service request tracking system. “Citizen responders” investigate the request, verify the location in the city’s geographic information system, and route the work request to the appropriate department. If a repair is needed, a work order is generated along with an estimated completion date, and a call center representative will notify the resident of the status of the request. When the work is completed, the resident is notified.

A performance standard requires a live representative to answer 85 percent of all calls within two minutes. If the wait times exceed two minutes, the calls are routed to an off-site answering service so residents will reach a live customer service representative any time they call.

In late 2009, Centennial sent 3,000 surveys to residents to measure their impressions of the city’s operations. The survey had a 32 percent response rate. “Some of our highest satisfaction was in the responsiveness of the city and the overall quality of life,” says Mayor Cathy Noon. “Eighty-nine percent of those who returned the survey ranked the overall quality of life as good or excellent, and 28 percent ranked us excellent.”

By conducting resident surveys frequently, officials can determine whether and where changes are needed in city services, as well as if they are meeting the needs of the community as intended. “The fact that [we] even ask is important,” Noon says. “[A survey] is an expenditure, but it’s important to be able to say, ‘I’m doing what my citizens want.'”

Centennial officials continuously evaluate the quality of services they provide, and although outsourcing is a common option for city operations, it is not the only option. A few years ago, the city requested proposals for its previously outsourced land use services, which include planning, engineering and development review. “At that point, the city council said, ‘From here forward, every time we bid a major service, bring us an in-house model,'” Wedding-Scott says.

In the end, the city decided to bring those services in house in a move that saved $750,000 annually and dramatically improved services, according to Wedding-Scott. She says the city is not committed to outsourcing or moving services in house, but to selecting the best option to provide services. “I think you should keep everybody on their toes, and each of us needs to know that our jobs can be done by someone else — and maybe cheaper, and maybe better,” she says.

On a quest for improvement and innovation, Centennial officials intend to continue questioning what services residents want, what services government should provide, and how to deliver those cost effectively and at a high level of quality. “We don’t want big government; we don’t want government for the sake of government,” Noon says. “We want whatever government it takes to do the tasks we feel we should do, and other than that, don’t do a lot more — but do what you do very well.”