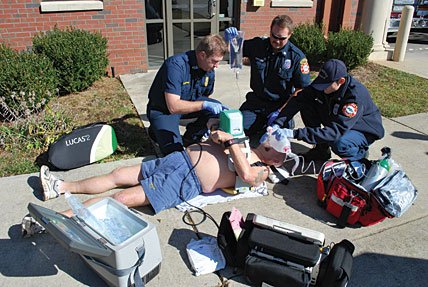 Since the Atlanta suburb of Sandy Springs was incorporated in 2005, public safety and health have been a major focus of city government, says Fire Chief Jack McElfish. So, the “Heart Safe Sandy Springs” program launched by the fire department in 2006 was a natural priority for the city. Through the Heart Safe program, the Sandy Springs Fire & Rescue Department places automated external defibrillators (AEDs) throughout the city and trains residents on how to use AEDs and CPR. Since 2007, the department has trained more than 4,500 residents in AED and CPR use and placed more than 150 AEDs throughout the city.

In 2009, bystander CPR was performed in 53 percent of out-of-hospital cardiac arrest events in Sandy Springs, compared with the national average of 25 percent. Also in 2009, the survival rate from out-of-hospital cardiac arrest was 8.8 percent, well above the baseline of less than 1 percent in 2006. Since launching the program, the fire and rescue department has saved 14 lives with AEDs and CPR.

Partnering with Rural Metro Ambulance and St. Joseph’s Hospital of Atlanta, Sandy Springs Fire and Rescue recently launched an additional “heart safe” program. Using the latest medical technology, the pilot program trains emergency medical technicians to use hypothermia treatment for cardiac arrest victims before they arrive at the hospital. The treatment helps prevent the loss of neurological function because of cardiac arrest, and the department has saved three lives with it so far.

“Our city council and mayor put great emphasis on emergency medical services and doing all we can to keep our citizens and visitors safe,” McElfish says. “We want to be as prepared as we can and save as many lives as possible. And this program helps make us a safer community.”