A tree house lives in … Manhattan

There's a place for everything, they say, but swanky Manhattan isn't typically considered the place for tree houses. 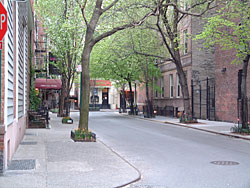 There’s a place for everything, they say, but swanky Manhattan isn’t typically considered the place for tree houses. And yet, New York’s upscale district has one now, in an historic Manhattan neighborhood whose residents have included Mark Twain and Eleanor Roosevelt. And, city officials are going to let it stay, despite protests by some neighbors, according to the Associated Press.

Shortly after Melinda Hackett put up the round, cedar tree house for her daughters behind their 1860s Greenwich Village townhouse, a neighbor complained, saying it looked unsafe and that there was no construction permit posted. “I got home, and the police were at the door,” says Hackett, a 49-year-old artist. “Then firefighters came.”

After months of legal battles, Hackett triumphed. Her girls’ tree house, apparently unique in one of America’s most densely populated areas, can stay, and it has been granted an official permit as part of a district with landmark status. “This is the little tree house that could,” Hackett says.