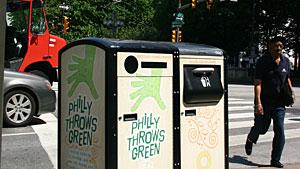 Replacing 700 wire wastebaskets throughout Philadelphia’s Center City with 500 solar-powered compactors and 210 single-stream sidewalk recycling cans has helped cut transportation and labor costs for city solid waste operations. City truck crews had been making 17 trips each week to empty the wire baskets. With the solar units in place, which are from Needham, Mass.-based BigBelly Solar, the city empties them five times a week, at an annual operating cost of about $720,000, which represents a 70 percent savings. 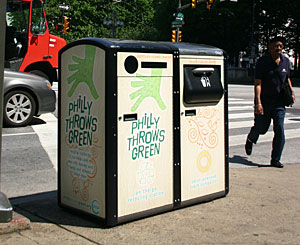 Performing the 17 collections each week required 33 workers on three shifts, while performing the five collections per week under the new program requires nine workers on a single shift. The other workers have been re-assigned to other tasks, including recycling pickup, which helps keep Philadelphia discards out of landfills.

Philadelphia spent about $3,700 to purchase each compactor and $800 for each recycling unit, said Streets Commissioner Clarina Tolson. A U.S. Department of Energy grant funded the replacement program, starting in April 2009, she added. “Philadelphia will save $13 million in cumulative collection [costs] over the next 10 years,” Tollson said.

The solar units crush trash using ambient daylight without electric power or direct sunshine, said Richard Kennelly, BigBelly Solar’s vice president of marketing. The compactors work in a variety of locations, he told Govpro.com: “They function well in northern climates, where it’s cloudy in winters, cold and frequently dark. They also work in Phoenix or Los Angeles, where a lot of trash receptacles might be near tall buildings and on the north side of the building where they never get direct sunlight and are always in the shade.” An electric motor that uses the same amount of energy as a small Christmas tree light bulb generates 1,200 pounds of compacting pressure, Kennelly added.

Because the solar units require fewer trips to empty them, waste fleets require less fuel and produce less carbon emissions and congestion. Less wear and tear on trucks and roads are other benefits of shifting to solar compactors, said Kennelly.

Wireless technology alerts managers when the solar units are becoming full, added Kennelly. “The units are networked wirelessly so that each machine knows when it’s getting full, and it communicates that status through a text message to a central computer server. That way, city officials can log in from any computer and see in real time how full all of the solar units are in the system. Fleet managers can schedule routes and collections based on real-time information. The solar compactor is really a robot that’s self-powered and communicates in real time how full it’s getting.” A case study has more information on the Philadelphia solar compactor installation.