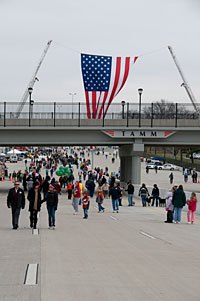 The competition recognized transportation projects in four categories — “Best Recovery Act,” “On Time,” “Under Budget” and “Innovative Management” — and the 10 projects that scored the highest number of points in four regional contests competed for the Grand Prize and the People’s Choice Award.

The I-64/US Route 40 project in St. Louis involved repairing and replacing the highway and its 30 bridges, which had become deteriorated. Anticipating public concern about the closing of the highway during the repairs, the Missouri DOT began public outreach and ad campaigns with suggestions to help motorists prepare for and navigate around the closure. In December 2009, I-64 reopened to traffic nearly one month early and $11 million under budget. A customer survey taken after construction was completed determined that the project had an overall public approval rating of 95 percent.

The Mississippi DOT project involved the reconstruction and realignment of an elevated segment of I-59 through Laurel, Miss., eliminating the “Laurel S-Curve,” which had one of the highest crash rates in the state. The project was delivered $6 million under budget.

The awards were presented Sunday at the AASHTO Annual Meeting in Biloxi, Miss. “These projects are making travel smoother, safer and less congested for millions of motorists every day,” said John Horsley, AASHTO executive director. “We know that taxpayers understand the value of quality transportation, and this contest shows how states are investing their limited resources wisely.” AASHTO presented a $10,000 cash award to each of the winning transportation departments to be used to support the charity or academic scholarship program of its choice.