Oklahoma City has found a unique way to use its broadband system in several weather-related areas. The network, which predicts severe weather and informs the public, has spawned an entire field of new research into weather patterns that are useful for daily city operations.

Oklahoma City has found a unique way to use its broadband system in several weather-related areas. The network, which predicts severe weather and informs the public, has spawned an entire field of new research into weather patterns that are useful for daily city operations. 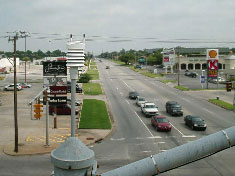 Oklahoma City is an appropriate place to study weather phenomena. It is massive, covering 622 square miles — more than Houston, Atlanta, or New York City. The city experiences severe heat waves in the summer along with extreme weather that often includes tornados. Oklahoma City runs a large WiFi network that spans 555 square miles, and the Oklahoma Climatological Survey (OCS), in partnership with the city, the University of Oklahoma and Oklahoma State University, has devised a way to piggyback off the network to measure atmospheric conditions every minute throughout the city year-round — a capability that is not replicated anywhere else in the world, says Jeff Basara, director of research with OCS and adjunct associate professor with the University of Oklahoma’s School of Meteorology.

Known as the Oklahoma City Micronet, the system was borne out of a six-week field experiment that began in the summer of 2003. After the terrorist attacks on the World Trade Center and the Pentagon on Sept. 11, 2001, the federal Departments of Homeland Security, Energy and Defense were eager to understand how chemical weapons and viruses released in the air might disperse throughout a city.

“After the equipment [from the experiment] was taken down, we began to get an idea of what we could do with an Oklahoma mesonet [a network of automated weather stations]. We spent five years raising funds to get this put together,” Basara says.

The project, funded by the universities and the state, is now 18 months old and leverages 36 monitoring sites mounted on traffic signals to automatically capture weather conditions, including air temperature, humidity, rainfall, air pressure, wind speed and wind direction. The Oklahoma City government offered free use of its network in 2007 in exchange for access to the weather data. The city’s IT staff worked closely with OCS meteorologists to understand how to use the Wi-Fi network. OCS spent 18 months developing conceptual ideas and prototype weather stations.

The network of automated weather stations is not technically wireless. The mesonet leverages the city’s Wi-Fi access points to power its weather stations. An Ethernet cable transmits the data back to researchers. Some 500,000-plus observations are received from the Oklahoma City Micronet every day and automated software evaluates the data received from the remote stations.

The researchers have managed to take standard weather instruments and integrate them with hardware components to create smaller versions of the weather stations. That capability was crucial for acceptance from the city.

“One of the city’s major concerns was not technical but aesthetic,” Basara says. “They wanted something that looked like it belonged on top of a stoplight. We knew our technology would work, but the problem was getting it to look good. Once it was installed at a corner, the IT folks at the city sent their bosses to look at the station. They came back asking what they were supposed to look for. That’s when we knew we had it.”

Steve Eaton, information security architect for Oklahoma City, characterizes the project as the most unique application the city utilizes. The Wi-Fi network currently runs about 200 applications that range from video surveillance to GPS tracking systems.

Anecdotally, the weather data is creating efficiency for the city. “We can measure rainfall and the city can use that information to determine which areas of the city may flood or send out sand trucks in a storm,” Basara says.

And OCS is gathering some fascinating information about weather patterns in urban areas, Basara says. In general, the researchers have found that the temperature in the city is generally 10 degrees higher than in the surrounding rural areas that are just 12 miles away, he says. Basara says this phenomenon is called the urban heat island effect. Concrete, steel and less greenery combined with buildings and vehicles releasing heat contribute to the phenomenon.

“We are using that information to study severe weather,” Basara says. “There is not a great grasp on how severe weather is impacted by higher temperatures in cities. Most of the observing infrastructure has been in rural areas.”

Moreover, researchers are studying heat waves and aim to determine what areas in cities are more vulnerable to higher heat. Such information, says Basara, can help predict which population groups may be more at risk during a heat wave. “We want to really begin to understand down to the neighborhood scale what people might be at risk,” he says. “It’s a public health issue.”

Lynnette Luna is a contributing writer to Urgent Communications, a sister publication to Government Product News.