The bridges are still falling down 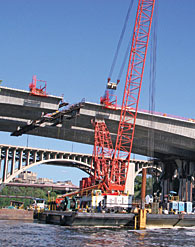 By Dec. 18, Congress will either fully reauthorize SAFETEA-LU or, more likely, extend funding temporarily for the act, which it has done twice since September, says Jim Fahey, APWA director of government public affairs. With other items like healthcare competing for federal money, APWA is concerned about how much will be left for transportation, Fahey says. “[Previous transportation funding] has never been adequate to deal with the backlog [of repair and construction needed,] and with other pressures from the budget, it makes it a more difficult argument to make that the funding should be increased, when you have so many other demands on the limited piece of pie,” he says.

But, more federal aid alone will not be the only answer to the infrastructure maintenance problem, AASHTO Executive Director John Horsley said in a statement announcing the winners of AASHTO’s 2009 America’s Transportation Awards in November. “Even more important is that our state and local governments use that money to deliver projects that quickly meet the needs of our communities in the most cost-effective and efficient manner,” Horsley said.

Meanwhile, illustrations of the need for infrastructure repairs continue to make headlines. In October, California Department of Transportation officials had to close the Bay Bridge for repairs after an eyebar and cable snapped off and fell to the roadway below, less than one month after another cracked eyebar was found and replaced. “Probably the Bay Bridge is, yet again, another example [of the need for infrastructure renovation,] but we see examples daily,” says APWA Executive Director Peter King.