Dialing back energy use 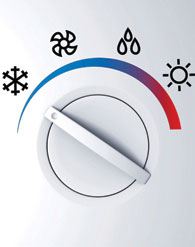 Keeping energy costs under control is a huge challenge for local governments nationwide, and as concern about global climate change increases, a growing number of communities are using energy management plans to attack both issues. Energy use and energy costs are tightly intertwined, making it possible for local governments to be both fiscally and environmentally responsible through proper management.

How much energy a local government uses affects both its costs and how much greenhouse gas (GHG) it emits. Every unit of energy has a related quantity of GHG emissions; the more energy used, the more emissions created.

However, the efficient use of energy is not the be-all, end-all of sustainability or energy management. Renewable energy — like solar, wind and emerging technologies — has an important role to play. Reducing employee commuting and travel also can help local governments reduce their environmental impacts. A comprehensive energy and sustainability program will include elements of all three, but will do so in a way that maximizes benefits and minimizes costs. It also will extend through all levels of the local government, from policy makers to public works departments to the treasurers’ offices to facilities staff. That does not usually mean big changes or greatly increased workload for employees, because small changes add up to big results.

The key to a successful energy management program is the quality of the planning behind it. The following five steps are designed to help local governments plan strategies to reduce their energy use and energy bills.

Any plan should consider how to access funding opportunities, because they often are the difference between pursuing a project and shelving it. “We want to create a lasting investment instead of just spending our money,” says Meg Parulis, town planner in Westbrook, Conn., where First Selectman Noel Bishop led an initiative to leverage grant money into an energy management plan. “There are so many possibilities out there — programs we can participate in, grants we can pursue. It’s hard to sort through it all. However, if we do the analysis, create a plan, and set priorities, we can pick projects that work for us and pursue grant money to implement them.”

Many communities also build outreach and education programs into their plans. Miami, for example, lays out educational aspects for each initiative it describes in its 2008 climate action plan. That includes promoting alternative commuting, providing energy efficiency information to residents, and publicizing available tax incentives for energy efficiency and renewable energy generation.

It is tempting to jump right into capital energy projects and initiatives, but that is risky. Installing a community wind turbine is a highly visible project, but does it offer both a financial or environmental return? Upgrading the boiler in a building might seem like an obvious choice, but could that money be better spent elsewhere?

Having a plan in place that is built on a solid foundation of data and analysis can answer those questions definitively and provide a clear benchmark against which to measure the success of any projects or initiatives. “Alternative energy projects are great if they make sense, and that’s the hard part,” Parulis says. “We’re not going to do it just to be ‘green.’ It has to be practical. It has to be pragmatic. Planning gives us the information we need to make good decisions.”

Step 1: Make a commitment to reduce energy use and GHG emissions. Establish a committee, working group, or task force.

Step 2: Define your boundaries. What will your plan cover?

Step 3: Determine your baseline. How much energy do you use, and what are your current emissions?

Step 5: Chose projects that fit your goals. Start with easy-to-implement projects with shorter payback, and consider all funding opportunities.