A survey by the Pew Research Center found that fewer Americans, across political party lines, think there is solid evidence of global warming.

However, a survey by the Washington-based Pew Research Center found that fewer Americans, across political party lines, think there is solid evidence of global warming, down to 57 percent from 71 percent last year. 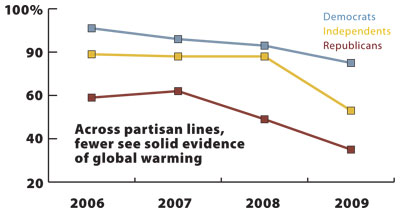 Nevertheless, the survey found that half of Americans favor setting limits on carbon emissions, even if it may lead to higher energy prices.