The re-charge of electric vehicles

Heavy doses of federal funding and incentives are reviving the once dim prospects for all-electric vehicles. 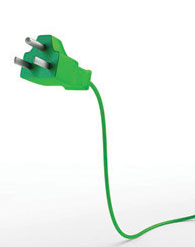 Until recently, all-electric vehicles — both cars and trucks — were not viable alternatives to petroleum-fueled ones. Concerns about their range, power and refueling left most of them parked on the sidelines as fleets experimented with other options, such as natural gas, propane and biodiesel.

That all began to change with the introduction of “hybrid” vehicles — models that combine electric power with gasoline or diesel engines to reduce the vehicle’s overall fuel consumption. Ongoing development of hybrid vehicles helped spur new designs in battery technology, reducing weight while increasing power storage and vehicle range.

Now, those advances, combined with a recent surge in financial backing by the federal government to help build a recharging infrastructure for electric vehicles, are helping rekindle the possibilities for widespread use of electric cars and trucks, especially in urban locations. “Battery development has held back electric vehicles for some time, and despite recent advancements in lithium-ion batteries that have led to improvements in power density … range will be limited to 100 miles at least for the first generation of electric vehicles,” says Joe Barra, director of customer energy resources for Portland General Electric (PGE), based in Portland, Ore.

Portland is one of several urban locations that is being targeted by the Electric Transportation Engineering Corp. (eTec), a subsidiary of ECOtality of Scottsdale, Ariz., for the development of a citywide network of recharging stations. The company received $99.8 million in federal funds to test and analyze electric vehicle use and charging infrastructure. The company also is working with Nissan North America on a project to deploy up to 5,000 electric vehicles and 12,750 charging stations in major U.S. cities, including Portland, San Diego, Phoenix, and Nashville, Tenn., In Oregon alone, up to 1,000 electric vehicles will be available at Nissan dealerships by fall 2010, with 2,500 charging stations to be installed at homes and businesses beginning in summer 2010 for residents and businesses that choose to participate, says Jim Piro, PGE’s president and CEO.

The funding for eTec’s ambitious plan is part of $2.4 billion in grants from the U.S. Department of Energy (DOE) that are part of the American Recovery and Reinvestment Act. Energy Secretary Steven Chu says those grants are focused on funding three key areas of the electric vehicle industry: roughly $1.5 billion for battery and battery component production, plus battery recycling; $500 million for production of electric drive vehicle components, motors and electronics; and $400 million to fund purchase incentives for plug-in hybrids and electric vehicles for demonstrations, building a recharging infrastructure and workforce training.

“This is transformational, and not just in terms of the dollar amount,” says Jennifer Watts, spokesperson for the Washington-based Electric Drive Transportation Association (EDTA). “This level of government investment creates a strong policy direction for electric vehicles, making them appeal to investors over both the medium and long term.”

She also says it is critical that the grants are “across the board” in the electric vehicle industry, not just funding vehicle development but also creating recharging infrastructure while funding new battery research. “You can’t just have a shot in the arm in one area of this industry,” Watts says. “It brings everyone to the table — electric car and truck makers, battery makers, etc. It makes sure all the pieces of the puzzle are in place so electric vehicles can make an impact.”

The DOE’s funding is spurring further development of electric vehicles — especially trucks. For example, Chicago-based Navistar received $39 million from the agency to develop and build all-electric delivery vehicles. The truck maker said it plans to build 400 all-electric vehicles in 2010 and expects within a couple of years to be producing several thousand vehicles annually. “These will be … medium and light duty models,” says Roy Wiley, head of corporate communications.

Smith Electric Vehicles U.S. Corp. in Kansas City, Mo., received a $10 million DOE grant toward the production of its all-electric medium-duty commercial trucks. The money will fund a nationwide demonstration project to validate the unit’s performance across a range of climates and locations as well as purchasing incentives to reduce the cost of its electric vehicles.

Mike Staran, president and CEO of Torrance, Calif.-based Enova Systems, which builds the electric powertrain used in Smith’s trucks, says the funding should help widen the range of flexible electric vehicles. “Municipal fleets are perfect for these vehicles, because most return to a central location and only travel relatively short distances during the day,” he says. “They also play into the life cycle demands most municipal fleets have.” Enova recently joined with Gaffney, S.C.-based Freightliner Custom Chassis Corp. (FCCC) to form an all-electric commercial chassis development program.

The key to making electric vehicles a viable alternative for fleets, however, is the recharging infrastructure. Piro says that 220-volt charging systems will be installed in residential, public and commercial locations in Portland, with “fast-charge” systems installed in high-traffic areas and strategic locations.

“This is … an important step forward to develop the critical infrastructure necessary in Oregon to support next-generation electric vehicles that are coming to market in 2010,” Piro says. “This project will give us a better understanding of how the charging of electric vehicles can effectively be integrated into a smart electric grid at the lowest possible cost.”

PGE forecasts plug-in electric vehicles accounting for as much as 30 percent of new vehicle sales by 2020 if a reliable recharging infrastructure can be established. “With normal turnover rates, they could account for 10 percent of all vehicles on our roads by then,” Barra says. “[As a result,] there may be a few less gas stations, replaced by quick-charge outlets, particularly along major transportation corridors.”

That will be critical to encourage the adoption of electric cars and trucks by fleets and consumers alike. Japan’s Nissan, for example, is rolling out an all-electric passenger car dubbed the LEAF in the U.S., Europe and its home country next year. The car combines a regenerative braking system that captures and re-uses power when the brakes are applied, and lithium-ion battery packs, so it can travel 100 miles on one full charge.

The company notes the LEAF is designed to be recharged up to 80 percent of its full capacity in just fewer than 30 minutes with a quick charger system like the one being designed for Portland. Charging at home using a standard 200-volt outlet is estimated to take approximately eight hours, the company adds.