Public Works Leader of the Year: Master of disaster

Floods have met their match in this year's Public Works Leader of the Year, Fort Wayne, Ind.'s Bob Kennedy. 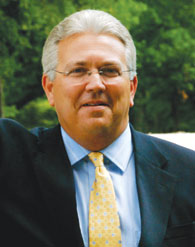 “We would not have weathered the ice storm without Bob,” says Deputy Mayor Greg Purcell. “Every time I called or turned around, Bob was there. When people needed something — food, getting to shelters or nursing homes without power — Bob was there throughout and was critical.”

During the storm, the heavy coating of ice took out power lines and more than 6,500 tons of tree branches, leaving 121,000 residents without electricity. While the ice from such storms typically melts after 48 hours, in December 2008, the temperature stayed below freezing for 10 days.

With his city in a state of frozen animation, Kennedy and the Public Works Department had to ensure that the roads stayed clear of limbs so emergency crews could get through. To help out, the city’s 311 call center, which usually only operates during business hours, took calls 24 hours a day to make sure residents could request help to reach shelters or report fallen power lines. Kennedy stopped in frequently to check on call center operators and update them on the street conditions. “A number of citizens couldn’t believe that we had our call center open 24/7,” says Mayor Tom Henry.

While Kennedy’s handling of the ice storm demonstrated his dedication, his actions during the extensive cleanup illustrated his creativity and ability to work across department lines. The Parks Department usually handles storm debris, but with 300 truckloads of tree branches to remove every day, the Streets Department under Public Works — where Kennedy worked for nearly 17 years — stepped in to help. “We have emergency plans in place,” Kennedy says. “We’re always ready, but [considering the amount of] debris, we’ve never seen anything like this.”

The cleanup required working with private contractors, which Kennedy oversaw. He also approached the county solid waste district, which the city had never done before, and asked for $250,000. Because of Kennedy’s persuasiveness, the solid waste district gave the money to the city, plus a similar amount to other communities.

Not only did Kennedy’s combination of planning and responsiveness prevent 2008 from being a disastrous year for Fort Wayne, he also made improvements to the city that his peers say will benefit it for decades to come. For those reasons, Bob Kennedy is American City & County’s 2009 Public Works Leader of the Year.

GETTING FLOODS UNDER CONTROL

Fort Wayne City Councilwoman Karen Goldner says the ice storm was “the most extreme issue” Kennedy faced in 2008; she adds, however, that his flood control efforts “will be what people see as important about 2008, five, 10 or even 20 years from now.”

Also known as the City of Three Rivers, Fort Wayne had experienced devastating floods before. As a lifelong resident and city employee for more than 20 years, Kennedy was very familiar with the issue. “He’s becoming our flood king,” Henry says. “He’s been involved in so many of them. He takes data from past situations and applies it to current situations to make us more efficient.”

In 2003, as deputy director of public works, Kennedy led the flood fight for the mayor when the St. Mary’s River saw historic flooding. Just 18 months later, the same area flooded again, damaging many of the same properties. That particular flooding pattern along the southern portion of the St. Mary’s River was new for Fort Wayne. In the 1980s the Army Corps of Engineers (ACE) conducted a study in the city and provided funding for flood prevention. At the time, the area along the southern portion of the St. Marys River was not a priority for ACE, because flooding typically was more severe in other areas of the city.

But, after the consecutive floods in the mid-2000s, Kennedy knew something had to be done. With the federal government focused on the aftermath of Hurricane Katrina, Kennedy helped develop six flood control projects in six neighborhoods and issued a stormwater bond with the support of residents, the mayor and the city council.

Using those funds, in fall 2008, the city completed a rain garden after buying 11 homes in a chronically flooded area of town and turning the land into a park-like green space that now acts as storage when the nearby creek overflows. Last year, Fort Wayne also largely completed the $3.2 million Woodhurst levee project, consisting of nearly one mile of earthen levee and concrete flood walls near the St. Marys River.

Because the project is near a historic park and affluent homes that enjoy a view of the river, Kennedy knew retaining the area’s charm was going to be a concern for residents. To establish a plan, he discussed it with the parks department and local neighborhoods. “Many of the ideas came from meetings with the public,” he says. “We got a lot of good input from citizens.” For instance, the wall — mostly hidden behind trees — was located to retain as much of the park view as possible. Adjacent churches even allowed the city to place portions of the project on their properties. “This is very typical of Bob’s approach,” Goldner says. “He is practical and wants the best solution for everyone that is most cost effective. That was very evident here.”

When the flood struck in early 2008, the Woodhurst project was not completed. But the flood-prone homes at the rain garden site had been removed, and Kennedy previously had led the effort to improve the early flood warning system and had worked with the weather service to provide better data. As a result, the city experienced far less damage than occurred during previous floods. The Federal Emergency Management Agency issued only $12,643 in housing assistance. “We had the highest river levels we’ve ever seen,” Henry says. “Because of the work Bob had done, as a result of his experience, fewer homes were affected. He worked around the clock, as did his staff.”

In between those unexpected challenges, Kennedy was able to enhance residents’ quality of life. For years, he has been passionate about Fort Wayne’s multi-use trail system and has been on the board of the non-profit Aboite New Trails group. “We don’t have mountains or oceans here,” he says. “People of all generations love using the trails. It’s rewarding to see them used every day.”

In June, Fort Wayne was one of 10 cities to receive the Denver-based National Civic League All-America City designation. The trail system, for which residents have raised millions of dollars, was one of three local efforts that contributed to the award. “He has been very instrumental in the alternative transportation network,” says Dawn Ritchie, Fort Wayne greenway coordinator. “He’s also worked for bike lanes and a sidewalk connectivity plan to create a safe place for pedestrians and bikers.”

Last year, in just five weeks, the community raised $1.2 million for the trail system after the TV show “Oprah’s Big Give” provided $10,000 in seed money to Aboite New Trails and challenged them to host five events and raise as much money as possible. The city and Fort Wayne’s other two non-profit trails groups banded together, with Kennedy getting involved in the fundraising efforts. He asked the mayor to match up to $500,000 from a bond dedicated to trails, and Henry agreed. By the end of last year, the public works department added 4.7 miles of trails to Fort Wayne’s network.

A Certified Six Sigma Black Belt, Kennedy has used his training to increase efficiencies in a couple of key areas. Using Six Sigma’s business management strategy, he identified inefficiencies in the city’s process for filling potholes, reducing the response time from 48 hours to three hours. He also helped cut emissions in Fort Wayne and save residents gas money by changing the way traffic signals operate at intersections during late-night hours. By making the signals more efficient, residents no longer have to sit at intersections, waiting for green lights.

REACHING OUT TO RESIDENTS

Kennedy’s peers say that part of his effectiveness is that he does not shy away from concerned or even upset residents. “One of Bob’s key strengths is that, unlike many engineers and public works types, he has an uncanny ability to work with neighborhood groups and citizens,” Purcell says. “Instead of sitting back and trying to avoid opposition, he engages with those people. I think that’s why he’s such a great public works guy.”

Kennedy frequently accompanies the mayor on his neighborhood walks, during which Henry strolls through a section of the city, knocking on doors and talking with residents about their concerns. Henry says Kennedy not only takes diligent notes, but also will stay behind if necessary to learn more about problems and how the city can help. Kennedy then returns to the office and tries to address the situations.

Those actions are characteristic of a public works director who leads by example, does not micromanage and dedicates himself fully to the task at hand, according to his coworkers. “He sees public service as a public calling and that it’s a privilege to work for the citizens and the city,” Purcell says. “And he instills that in his staff and in all who work for him.”