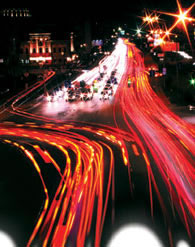 If you did not know better, West Des Moines, Iowa, Traffic Engineer Jim Dickinson could be starring in an episode of “24.” Sitting before a bank of computers, high-definition camera screens and fiber-optic gadgetry, Dickinson moves a joystick in his palm while watching an overhead monitor. A camera zooms in on a white Chevy Tahoe passing through one of the city’s 65 camera-equipped intersections as Dickinson describes the power wielded from this tiny room just south of the Iowa city’s historic Valley Junction neighborhood.

“At any point, we can remotely change the signal timing to improve traffic flow. Then we change it back, and nobody even knows we did anything,” Dickinson says.

But, improving traffic problems on the fly is something Dickinson and Associate Traffic Engineer Eric Petersen hope to avoid in the future. Their goal is to improve roadway infrastructure planning, thereby decreasing the need for everything from small-scale intervention to large-scale construction improvements. To achieve that goal, West Des Moines Public Works commissioned Iowa State University’s Institute for Transportation (InTrans) to build a custom traffic-modeling tool.

What makes West Des Moines’ traffic modeling different is the way it was constructed and operates. Whereas others are based on what a city will look like in 20 or 30 years, West Des Moines’ tool assumes a full-build scenario for every “what if” situation a user uploads. “The problem with doing a 20-year projection is that, depending on changes, you could be there in five years,” Dickinson says. “A full-build system reduces the risk of under-building.”

The InTrans team and city staff built the tool by first uploading existing land uses to the software. For undeveloped parcels, the team assumed land uses based on current land use plans. Corresponding trip data (supplied by the Institute of Transportation Engineers) and Synchro signal timing simulation information was then uploaded. The result was a distinctive framework designed to lend hard-data support to roadway proposals for the third fastest-growing city in Iowa.

The tool is unique also for its ability to break down trips for each individual parcel within a Traffic Analysis Zone. Other modeling tools allow only for very broad, regional analysis or very precise, driveway-level analysis. West Des Moines’s new tool meets in the middle, allowing users to analyze the performance of different roadway scenarios in an individual development under full-build conditions.

According to Dickinson, the tool lends essential support to the acquisition of right-of-way in new development areas. “To come back and add lanes to existing roadways is extremely difficult,” he says. “Securing right-of-way becomes more and more expensive every day, and we are hoping this tool will help us spend tax payer dollars more wisely.”

Much of the reason for creating West Des Moines’ one-of-a-kind traffic modeling system was the desire to plan for the right size roadways to meet future traffic demands. When a six-lane roadway was proposed for access to a soon-to-be-built, 200-acre retail center on the city’s western edge, many could not wrap their minds around the idea.

“Our city leaders weren’t convinced we needed this extensive of an infrastructure before there was even a single structure built,” says Joe Cory, West Des Moines deputy public works director. “At the time, our interstates didn’t even have six lanes.” City Councilman Ted Ohmart was among the leaders who needed convincing. “It’s pretty hard to envision when you look out and see only cornfields,” Ohmart says.

But, after seeing presentations using the traffic modeling software loaded with the parameters in West Des Moines’ comprehensive plan, Ohmart and his fellow councilmen knew the six-lane proposal was the right thing to do. “This software has been a godsend,” Ohmart says. “I don’t know what we’d do if there were only four lanes out there today. It’d be gridlock.”

Aside from providing the support of traffic level and trip data, the modeling tool uses SimTraffic software for animation, demonstrating how a proposed roadway network will perform under parameters set by the modeling tool’s user. Color-coded, cartoon vehicles “drive” along the proposed roadway, helping city leaders and policymakers see into the future.

“This is great for presentations because you can show people what the model predicts rather than just tell them,” Dickinson says. “It’s about the closest thing we have to a crystal ball.”

Examples include Wells Fargo, which recently built a large office complex in the city’s southwest area, and Aviva and Microsoft, two companies that have purchased land in the area for office development.

Cory believes the tool has improved city-developer relationships. Because all developers are now required to use the city’s engineering staff rather than hire independent consultants, impact studies are consistent. In addition, because hard data exists to support land-use or roadway decisions, there is less temptation for developers or businesses to suspect political agendas.

Dickinson also points out the tool’s ability to advance relationships, particularly between planners and engineers. “This is not just a straight engineering project. We stand back while our planners provide the land uses, which gives them a buy-in to the analysis,” he says. “Both groups now have a better idea of what each other’s work involves and how that work affects the traffic network. We’re now working together in a way we haven’t in the past.”

Lenexa, Kan., near Kansas City, currently is not as concerned with how to develop its roads as West Des Moines, but it needed much better control of its traffic. “Developing a comprehensive signal timing plan with the kind of detail and coordination we need takes the kind of manpower we just don’t have,” says Transportation Manager Steve Schooley. “We’ve been able to develop coordination plans here and there, but to really do a detailed plan for multiple times along the multiple corridors we have, we just really don’t have the staff to do that.”

Rather, Schooley is using inSync, a system from locally based Rhythm Engineering, which times and coordinates traffic signals based on real-time information captured by video. Similar systems coordinate signal timing automatically, but they must be based on a preset timing plan that takes several months to create. In Lenexa’s system. Schooley believes the system’s memory is an important factor. “If it goes into a fog mode or a camera doesn’t work, it actually remembers the sequences from the same time period on the previous day,” he says. “So, you don’t have a system working off a recall, giving a left turn phase 30 seconds in the middle of the night.”

Aside from saving the city the expense of adding staff, the adaptive signal timing technology claims to save the driving community, as well. However, impressing Lenexa’s drivers with the technology is taking some time. Because the system may bring up phases in an atypical sequence, drivers can be confused, even frustrated, by what they perceive as odd behavior from the signals.

Schooley likens the technology to a traffic cop. “It’s optimizing the operation as opposed to following a set sequence. It’s always thinking and processing how to optimize the signals, so it’s not unusual to do something that’s unexpected by the driver.”

Schooley says some drivers are beginning to notice the benefits, as well. “I had a conversation with a resident who said, ‘It does some weird things, but I’ve sure noticed a lot less congestion through the corridor,'” Schooley says.

PERMISSION TO CUT IN LINE

As another fast-growing city approaches full build-out, planning for efficient and attractive transit systems has become the center of attention. Mike Mah, city transportation engineer for Chandler, Ariz., says the community has mainly focused on building roads and freeways. “Now we’re planning ahead, and in the future, there will be a very heavy emphasis on transit,” he says.

To reduce the effects of congestion on the city’s bus system, Mah and his team incorporated what it calls “queue jumper” technology into signalized intersections where bus traffic is heaviest. The city hopes the technology, which gives buses permission to “cut in line” at intersections, will entice residents to leave their cars at home.

“The goal is to make the buses competitive with the cars so that transit is much more efficient and encourages more people to ride the bus,” Mah says. As part of the plan to craft the city’s main thoroughfare into a high-capacity transit corridor, the city set out to widen three signalized intersections along Arizona Avenue. In addition to adding more through and turn lanes, the city also added bus-and-bike-only lanes.

Mah’s team went a step further by adding special traffic signals for the 40-foot buses that would be traveling in the designated lanes. Today, when a city bus is stopped at the light, a camera detects its presence and sets in motion a “head-start” signal that will allow the bus to enter the intersection four seconds sooner than the vehicles stopped at the same light.

While bicycle riders may use the designated lanes, they are not allowed to enter the intersection early. According to Mah, only bus drivers have been trained to recognize and respond to the special “go” signal, which is a glowing vertical bar borrowed from a light rail transit signal system.

The queue-jumper system was developed in-house by adapting a 16-phase controller and cabinet. Mah says the controller manufacturer was impressed with Chandler’s adaptation of the system and has since incorporated some of Chandler’s features to offer the queue-jumper option to other cities.

Chandler has three queue-jumper systems in operation on Arizona Avenue. The city is planning to add several new queue-jumper lanes on other planned high-capacity transit corridors. As they plan for the future of the city’s transit system, Mah and his team see the potential for time and cost savings from the use of the queue-jumper technology.

“Each bus saves between 20 and 30 seconds at the queue-jumper intersections, saving them up to a minute and half on Arizona Avenue,” Mah says. “If we can do this often enough along several corridors, we might be able to use fewer buses, saving money in the long run.”