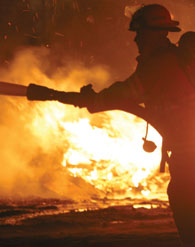 Nearly half of state legislatures have signed laws that extend workers’ compensation benefits to firefighters who contract cancer, without requiring the individuals to prove a direct link to their disease and their occupation. Whether the laws are necessary protections for firefighters or an unnecessary drag on already thin-stretched city budgets has become an active debate between the Washington-based National League of Cities (NLC) and the Fairfax, Va.-based International Association of Fire Chiefs (IAFC).

In April, NLC released a report, “Assessing State Firefighter Cancer Presumption Laws and Current Firefighter Cancer Research,” which reviewed 17 studies about links between firefighting and cancer rates conducted between 1995 and 2008. The NLC report concluded that there is a lack of substantial scientific evidence that firefighters suffer higher cancer rates than the general population.

IAFC sent the NLC report to a panel of independent experts, and, in May, issued a statement that it used “flawed research methodology that produce predetermined outcomes.” Several studies were excluded from the report that IAFC’s experts contend show a higher risk of cancer among firefighters. Also, the panel concluded that there was no quantitative review of the NLC report, published criteria selecting studies for inclusion were inconsistent and that NLC investigators were unable to reliably classify the studies included. “If the National League of Cities is truly concerned about evaluating this issue ‘objectively and scientifically,’ then they need to look at all the data in a scientifically sound manner,” said IAFC President Chief Larry Grorud.

NLC is sticking by the results of its report, says Gregory Minchak, NLC’s manager of media relations. “We really appreciate the work that firefighters do,” Minchak says. “But, at the same time, a lot of this is happening, and there are some burdens that are being put on municipalities and cities that are just very difficult to cover. They don’t necessarily have the resources to handle these claims.”

Minchak says that the results of the NLC study simply are an indication that more research must be done to determine the necessity of the laws. “And, we just hope that state legislatures and people who are considering the presumptive laws will slow down and take a look and consider the report and consider the full ramifications of what they’re doing in terms of costs,” he says.