At the breaking point

The sorry state of the country's water infrastructure and what it means if we don't fix it. 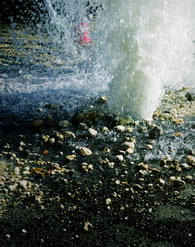 Residents of a neighborhood on the southeast side of San Antonio awoke Dec. 12, 2008, to a mess outside their homes. A water main had broken, spilling water over lawns and damaging Christmas decorations. The San Antonio Water Systems (SAWS) spokesperson attributed the break to drought and the age of the pipes.

The San Antonio neighborhood was not the only one in the city to experience a water main break last year. According to SAWS, the water district had 800 more breaks in 2008 than in the previous year, an 80 percent jump. And San Antonio’s pipe bursts were not isolated. A Dec. 12 Internet search using the term “water mains breaking” found 3,293 items. Granted, the time span was greater than one day, but the sheer volume of news stories on the subject is a good indication of the size of the problem. For example:

And, in one of the biggest water main breaks in recent history, a 66-inch main broke in Bethesda, Md., making national news just before last Christmas. The break poured 150,000 gallons per minute down a major road, coincidentally named River Road, in a rush that marooned a dozen commuters in their cars until helicopters could lift them to safety. That was only one of 1,709 water main breaks and leaks in Montgomery and Prince George’s counties in 2008, the fifth worst year since 1984, according to the Washington Suburban Sanitary Commission (WSSC). WSSC’s record for water main breaks and leaks in one year is 2,129, set in 2007. “We’re plagued by old pipes,” explained John White, spokesman for the local water utility.

The anecdotal evidence is supported by several national studies that have concluded that water infrastructure — for both drinking water and wastewater — is badly in need of an infusion of funding to rebuild aging pipes and plants. Unless the nation undertakes a concerted effort in the next two decades, the studies predict more pipe breaks and water shortages and a return to the pollution levels last seen before the enactment of the Clean Water Act of 1972, when rivers were catching fire and swimming holes were closed because of excessive bacteria, according to the Alexandria, Va.-based Water Environment Federation (WEF).

Experts from the U.S. Environmental Protection Agency (EPA) and the Reston, Va.-based American Society of Civil Engineers (ASCE) predict that the nation faces a calamity if spending is not increased by as much as $450 billion over the next 20 years to maintain and repair drinking water and wastewater networks. They foresee a future of ruptured pipes and sinkholes, tainted drinking water and sewage-saturated rivers and lakes. “Our nation’s water infrastructure needs have grown while federal funding has declined,” says Rep. Earl Blumenauer, D-Ore., a long-time advocate of investment in transportation and water systems. “We urgently need a new federal commitment to significantly increase investment in our water infrastructure.”

In the most authoritative assessment of the nation’s infrastructure needs, the EPA published “The Drinking Water and Clean Water Infrastructure Gap Analysis” in 2002 that estimates the gap between historical funding trends and needs from 2000 to 2019 to be as much as $450 billion. For wastewater, the estimates of investment needs and spending used to calculate the gaps cover all of the approximately 16,000 publicly owned treatment works. For drinking water, the analysis covers the approximately 54,000 community water systems and the 21,400 not-for-profit non-community water systems in the 50 states, U.S. territories and tribal areas.

In its 2002 analysis, the EPA estimated current capital spending at a pace of $13 billion per year for clean water and of $10.4 billion per year for drinking water. The capital payments gap — calculated by subtracting the current spending from the capital payment needs — amounted to as much as $177 billion for clean water and as much as $267 billion for drinking water. Other studies from the Congressional Budget Office, the Water Infrastructure Network and the Denver-based American Water Works Association (AWWA) all have drawn similar conclusions, though the actual estimates vary.

“The bottom line is that we will need to spend hundreds of billions of dollars for drinking water and wastewater in the next 20 years,” says Tom Curtis, deputy executive director for government affairs for AWWA, the association representing municipal drinking water utilities. “Drinking water has tremendous needs, and wastewater needs are just as great.”

Local governments are spending only 80 percent of what is needed to upgrade their drinking water systems, and the enormous cost of pipe replacement is the leading factor in the shortfall, Curtis says. “That’s the lion’s share,” he says. “People don’t realize how expensive these networks are.”

The cost involves tearing up streets, laying down new pipes and then repaving. One Midwest city estimated that completely replacing its existing network of pipes would cost $2 billion. “Pipes last a very long time,” Curtis says, “but they don’t last forever.”

Many people think that the replacement issue is confined to older cities in the Northeast, where pipes may be 100 or more years old, Curtis says. But those older cast iron pipes have a very long economical lifespan and may last for another 20 years. Newer pipes, made with less expensive materials, may have shorter lifespans. That is why pipes laid 100 years ago may still be in usable shape, while neighborhoods created in the 1950s and 1960s may have bursting pipes today.

As a consequence, Curtis says, over the next 20 years both older and newer cities will be facing replacement costs. “There’s a great deal of drinking water infrastructure that will need replacement in a fairly compressed time period,” he says. “We will need to be ramping up expenditures on pipe replacement.”

For the most part, drinking water systems draw revenues from users through rate assessments and taxing districts. The industry continues to believe that the water users should bear the greatest burden of the cost of infrastructure replacement, Curtis says. However, some water authorities face financial hardship and will need support from federal and state programs.

Without the investment, users will face a “degradation of service,” including more main breaks, pipe leaks and diminished water pressure, Curtis says. In addition, economic expansion in many industries relies on the availability of a reliable water supply. Newer issues, such as climate change and drought, bring additional urgency to careful water management. “We are looking out over a long time horizon,” he says. “We will be competing for use of every drop.”

Wastewater facilities are just as bad

The investment needs of wastewater facilities are very similar to the massive upgrade requirements of drinking water facilities, says Tim Williams, WEF’s managing director of government affairs. “The infrastructure that was built in the ’50s, ’60s and ’70s is at the end of its design life,” he says. “Some are way beyond their useful life and need to be replaced. Cities are just running their systems until they fail.”

According to ASCE, the nation could lose much of the gains it has made in improving water quality over the past 30 years unless increased investment is made in the infrastructure in the next 20 years. “The U.S. could wind up with dirtier water than existed prior to the enactment of the Clean Water Act of 1972,” ASCE states in its 2005 Report Card for America’s Infrastructure.

Williams cites a number of reasons for the need for increased wastewater funding. He notes that there are increasingly stringent regulations that require changes in plants that are decades old, the population base of some cities has diminished so that costs are borne by fewer residents, and the manufacturing base, which has often carried a large share of treatment costs, has withered in some cities. “There needs to be a community to spread the cost around,” he says. “It’s a real hardship.”

Like Curtis, Williams believes that users should pay for the operations and maintenance of the wastewater systems and the substantial majority of the costs of capital upgrades. But, he says that the improvements will move forward faster with federal assistance. In economically depressed cities, the only prospect of completing the necessary renovations would be through grants, because the cities do not have the financial capacity to pay for them.

The 2005 ASCE report card states that older systems are plagued by chronic overflows during rain storms and heavy snowmelt, leading to raw sewage discharges into surface waters. The EPA estimated in August 2004 that the volume of combined sewer overflows discharged nationwide is 850 billion gallons per year. Sanitary sewer overflows caused by blocked or broken pipes release as much as 10 billion gallons of raw sewage yearly, according to EPA.

There are up to $20 billion in capital projects that are already designed and approved and only need funding to begin work, Williams says. “We look at this as capital investment,” he says. “It’s very expensive capital costs that will have to be incurred anyway. It’s better to take care of this sooner rather than later.”

One water project that is ready for construction is the regulation-mandated conversion of an open reservoir system in upstate New York to a closed reservoir system, which will be ready for bidding early in 2009, at an estimated cost of $55 million. (See “Regulations prompt storage facility construction“).

The construction program is part of an ongoing capital needs program that is designed to upgrade the Onondaga County Water Authority in the Syracuse area over a 20 years, says Mike Hooker, OCWA’s executive director. “This way we can smooth out our cash flow,” he says.

OCWA regularly assesses the condition of its water mains throughout its network. Much of the infrastructure is 100 years old, while other parts are much newer. Ironically, the cast iron pipe is sometimes in better condition than the newer pipe, because of the better quality of the older pipe or the acidic nature of the soils in the newer areas. “We invest $7 million a year on average,” Hooker says. “Everything we make from revenues we put right back into the system.”

Hooker, who chairs AWWA’s water utility council, is very aware of the needs of the water system nationwide. “The cheapest way to protect our water supply is not to let it get contaminated in the first place,” he says.

Both AWWA and WEF advocate an expansion of the state revolving loan programs, which receive federal funding for low-cost loans to the drinking water and wastewater providers. Over the life of the loans, the savings can be millions of dollars, but the limited availability of the revolving line of credit means few projects can move forward, according to the organizations.

ASCE advocates an annual appropriation of $1.5 billion from the federal general fund to the state revolving loan programs. ASCE also supports a significant increase in research funding to develop more cost-effective means of improving the nation’s water system. “Next to air, water is the most important resource on earth,” Hooker says. “There’s no substitute for it.”

Projects in the works