The largest array of solar cells on federal property in Hawaii was formally dedicated on Thursday. Located atop the U.S. Navy's Ford Island Building 54

The largest array of solar cells on federal property in Hawaii was formally dedicated on Thursday. Located atop the U.S. Navy’s Ford Island Building 54 at Pearl Harbor, the array covers 31,000 square feet of roof space. 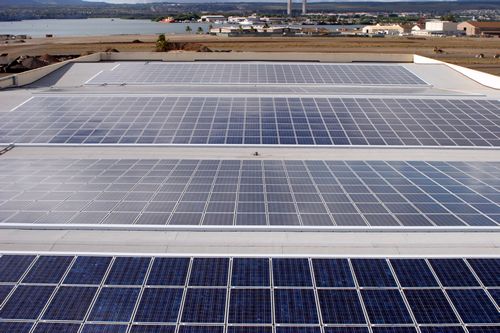 The 309 kilowatt PowerLight PowerGuard solar electric rooftop system will generate clean and reliable electricity for the Navy. It incorporates 1,545 solar panels made by Sharp Corporation. During the daytime, this solar system generates enough energy to power the equivalent of 300 homes.

The array’s solar power will be added to the Navy’s electrical grid at Pearl Harbor and provide additional power during the busiest part of the work day.

Not only will it reduce the demand on Hawaiian Electric Company’s power grid, it will improve air quality by avoiding thousands of tons of polluting nitrogen oxide, sulfur dioxide and carbon dioxide emissions.

In addition, the solar power array is expected to save the Navy $40,000 per year, at current rates.

“Installing photovoltaics at governmental facilities is a sound, sensible way for us to use distributed energy resources to meet our renewable energy goals as well as reduce operating costs,” said Captain Roth. “In addition, deploying these technologies assures our energy independence and national security.”

Pearl Harbor’s solar power system began as a Hawaiian Electric Company (HECO) initiative and joint venture with the Navy. Originally, HECO offered to finance and build a photovoltaic array on Navy land, which they would lease.

Over time, the project was adjusted and what began as a 100 kW photovoltaic system in a large-scale energy park to be located in Pearl Harbor’s West Loch area, evolved into a 309 kW system placed on the roof of Building 54.

“Solar power proved to be a wonderful energy solution,” said Kevin Saito, energy manager, NAVFAC Hawaii. “By leveraging Hawaii’s abundant sunshine, this photovoltaic system combines the environmental benefits of solar with the ability to provide onsite power. This project provides a more, cost-stable source of electricity, mitigating the sharp increase in fuel prices with which we are so familiar.”

The 309kW photovoltaic system was designed and installed by PowerLight Corporation of Northern California. Funding for the project was obtained by the state of Hawaii’s Congressional Delegation.

“NAVFAC Hawaii’s vision to implement innovative technologies is terrific; our collaboration with the Navy has been instrumental in making this project, as well as one at Naval Base Coronado, a reality,” Shugar said. “PowerLight is committed to helping make the Navy more energy and cost-efficient, with minimal impact to the environmen10/18.
Provided by the Environmental News Service.