Solar Charged And Ready To Go

Joe Hynek pulls a high-tech hat off his desk and pops it on his head. Look how this is made, he says from underneath a round and pointy rice paddy hat.

Joe Hynek pulls a high-tech hat off his desk and pops it on his head.

Look how this is made, he says from underneath a round and pointy rice paddy hat. The wrap-around nylon visor keeps sun and rain off the face and neck. The mesh headpiece keeps the hat secure. There’s a lot of room under there for a cooling breeze.

And there’s something extra that you can’t buy at the camping store–just yet.

Hynek, an Iowa State doctoral student in mechanical engineering, had attached thin sheets of solar panels made by Ames-based Iowa Thin Film Technologies to the top of the hat. Hynek is working to make the solar cell technology wearable and capable of keeping your cell phone or your handheld computer charged and ready.

His work is part of a $22,500 grant to Mark Bryden, an associate professor and associate chairman of Iowa State’s department of mechanical engineering, from the university’s Institute for Physical Research and Technology. The grant will allow the project’s collaborators–Bryden, J.R. Campbell, an Iowa State associate professor of textiles and clothing, and Hynek–to develop the technology and the intellectual property that could lead to a new Iowa company.

The researchers’ grant proposal says they’re not out to build a clothing company. They want to develop technology, designs and consulting services for manufacturers. They say now is a good time for their project. And they say Iowa State is a good place to do the work.

“Early entry into this niche between engineering and textiles will enable us to develop the understandings, trade secrets, patents and other necessary intellectual property to become an important part of this market,” the grant proposal says. “Iowa State University, with its strong engineering program and strong textile design program, is well positioned to support this program.”

Once the researchers have the technology figured out, the grant proposal predicts significant interest from clothing designers and manufacturers. 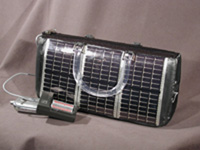 Hynek already has an award-winning design for a potential product: a “Power Purse” covered with solar cells that really do recharge batteries. Hynek’s handbag began with a job at Iowa Thin Film Technologies that got him thinking about how solar technology might be wearable.

So in the fall of 2004 he took Iowa State’s Textiles and Clothing 326, Experimental Design and Presentation. He made the handbag as a class project. Then he entered it in the American Association of Textile Chemists and Colorists’ annual design competition. It won second place for aesthetic design and $500.

And that’s proof that wearable solar technology can be pretty. But making it pretty isn’t necessarily easy.

“A large problem with putting technology in clothing is that it looks dorky,” Hynek said. “My goal is to use solar cells in a way that’s unobtrusive to fashion while making something that’s useful.”

He’s concentrating on purses, hats, jackets and other accessories for now. That technology is a little easier because it doesn’t have to stand up to regular trips through the laundry. But he’s also working on technology that will stand up to washing machines.

The goal is to come up with some patents. And it’s to make life a little easier for people who can’t leave home without their electronics.

“My major goal is to give convenience to people,” Hynek said, “so they’re always charged and always on the go.”