Information Accessibility for All

Information Accessibility for All 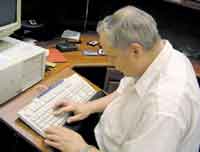 Although Stephen Rainard is blind, he operates a computer in his job with the U.S. Veterans Administration (VA) in Cleveland, OH. Currently employed as a transcriber with the VA’s Vocational Rehabilitation and Education Division, Rainard has held various positions with the federal government for the past 28 years.

Rainard’s blindness resulted from his premature birth, at which time he was given excessive oxygen that led to a degenerative eye disease. His eyesight progressively deteriorated, and he became completely blind by the age of 13.

Nevertheless, Rainard learned how to type and keep pace with steady strides in computerized technology. He notes that the advent of computers was a monumental step in assuring typing accuracy.

“I don’t think people realize that before computers, for a blind person to be competitive as a transcriber, the stress factor was at least twice [what] it would be for a person who could see,” says Rain-ard. The stress factor related to not being able to proofread one’s work to fix mistakes.

Then, about three years ago, Rainard received JAWS speech synthesis software, which reads aloud each word typed on a PC. The software provides an added boost for typing accuracy.

“Having a talking computer is an advantage that puts me on a more competitive footing with my sighted counterparts,” Rainard notes. “I’m able to control the quality of my work more critically, especially with spelling and grammar checks, and the quality factor goes up exponentially.”

Rainard primarily transcribes reports and letters from cassette tapes, using a basic word-processing program. He uses a standard PC keyboard, although the “F” and “J” keys are slightly upraised, providing tactile cues so his fingers are placed correctly on the row of home keys. Rainard then e-mails the transcribed documents to the indicated parties or prints copies on a laser printer.

For Rainard, successful computer navigation depends on initiating the correct sequence of steps, performed in a logical order by pressing appropriate keys.

At home, Rainard also works on a computer, but for different reasons. In his spare time, he uses his home computer to e-mail information to family members, pursue his hobby of creative writing, and gather information from Web sites.

Rainard emphasizes that he often becomes frustrated trying to access Web sites, even though he uses JAWS speech synthesis software, as well as Open Book software (which includes a scanner for reading text from printed pages).

“I’ve found that with a lot of Web sites, I get to what I believe to be the information I want, only to get more links,” Rainard says. “You feel like you’re just going around in circles trying to navigate through all the links.”

Although Rainard believes that his supervisors are very supportive and have provided him with assistive equipment to enhance his job, he wishes that Web sites were more tailored to sight-impaired users.

Now that Section 508 requirements are advancing through federal agencies, Rainard and other federal employees with disabilities can be assured of receiving assistive technology. In addition, as Rainard surfs Web sites, he may see welcome changes. Section 508 requires that federal Web sites be accessible to members of the public who have disabilities, and other government and private-sector sites may elect to follow the accessibility guidelines.

Laying Down the Law
During the 1990s, use of the Internet and reliance on information technology skyrocketed. By 1997, about 19 million Americans were using the Internet, and that number tripled in just one year.

To complement the Americans with Disabilities Act (ADA) of 1990, and to meet information technology needs of individuals with disabilities, Congress initiated sweeping legislation. On August 7, 1998, President Bill Clinton signed the Workforce Investment Act, which amended and strengthened Section 508 of the Rehabilitation Act (enacted in 1973).

Standards for revising Section 508 were then drafted, taking into consideration the comments of more than 100 individuals and organizations. In turn, the Access Board, an independent federal agency devoted to accessibility for people with disabilities, finalized the standards, and enforcement of the new and improved Section 508 commenced on June 21, 2001.

Section 508 requirements apply to any federal agency or department that develops, procures, maintains, or uses electronic and information technology. These federal entities must ensure that people with disabilities, including federal employees and members of the public, have access to needed information. The access must be comparable to that of individuals without disabilities.

National security systems are exempt from Section 508 compliance. In addition, a federal agency can be exempt from providing assistive technology if it can prove that implementation would pose an “undue burden” of “significant difficulty or expense.”

Although the scope of Section 508 is limited to the federal sector, states receiving federal assistance, such as grants from the U.S. Department of Education, may also be required to comply.

Individuals with disabilities are responsible for enforcing requirements of Section 508. To cite non-compliance, a person with a disability may file a complaint with the federal agency in question or initiate a civil action in federal court. Complaints and lawsuits can only be filed against products that are procured after June 2001.

Equipment Emphasis
According to the Assistive Technology Act of 1998, assistive technology generally refers to “products, devices, or equipment, whether acquired commercially, modified, or customized, that are used to maintain, increase, or improve the functional capabilities of individuals with disabilities.” Overall, disabilities cover four basic areas of impairment: vision, hearing, mobility, or cognitive and learning skills.

According to the National Federation of the Blind, more than 90 percent of Section 508 requirements center on providing nonvisual access to information.

CAP Heads Federal Assistance
To help the Department of Defense (DoD) and any other federal agency procure assistive technology, the DoD established the Computer/Electronic Accommodations Program (CAP) in 1990. CAP is now the federal government’s centrally funded accommodations program through which any federal agency can receive assistive-technology products and services at no cost to the requesting agency. Goals are to make the federal government a model employer for people with disabilities.

Before requesting specific technology, an Interagency Agreement must be filled out between the DoD and respective federal agency. The agreement must be signed by the head of the federal agency or another authorized individual. Then, to request specific equipment, the respective agency completes a two-page Accommodation Request Form, which may be submitted to CAP over the Web, by e-mail, or fax. After CAP approves the request, the equipment is purchased by the DoD and delivered directly to the agency within approximately seven days. The respective agency then owns the equipment.

“We see a mix of the accommodations needed to support employees (new and current) with targeted disabilities,” Cohen adds. “We also see a growth of requests for accommodations from individuals who are developing disabling conditions as they get older or due to injuries and illnesses.”

Besides providing adaptive equipment, CAP also provides a range of services to help agencies create accessible work environments for people with disabilities. Federal organizations can turn to CAP for technical assistance, including clarification of Section 508 requirements. In addition, federal employees can attend demonstrations of assistive technology at the CAP Technology Evaluation Center in the Pentagon.

One CAP partner is the Department of the Interior (DOI), which includes agencies such as the National Park Service, U.S. Geological Survey, and Bureau of Land Management.

According to Jennifer L. Meltz, assistive technology analyst for the DOI’s Accessible Technology Center, the most requested assistive products include:

“CAP will pay for any brand of assistive technology,” Meltz says. “When employees have a hard time choosing between products, I normally send them a list of Web sites, where they can look at the products and choose a product that seems most appropriate for them.”

In addition, the DOI’s Accessible Technology Center offers a Web Accessibility Class to meet Section 508 requirements. Launched in February 2001, the three-hour, hands-on class has been taught to more than 500 people, all over the country.

“Each student is at a computer,” Meltz explains. “We go over 16 Web requirements of Section 508, discuss examples, and then each student tests his or her own Web page with a JAWS screen reader so they can put themselves in the shoes of a person who is blind and trying to use a Web page. We have mostly taught Department of the Interior employees, but people from all federal agencies are welcome to attend.”

Adds Cohen, “Having the federal government or any company comply with Section 508 is good business. It allows for better flexibility and interoperability.”

Private-Sector Initiatives
In response to Section 508 requirements, as well as to serve the large market of people with disabilities, many technology companies are focusing on providing assistive products and services. According to the World Health Organization, 54 million people with disabilities currently reside in the United States. These disabilities range from repetitive strain injuries to total vision loss.

To help government agencies, organizations, and businesses meet growing demands for assistive technology, IBM Corporation established a comprehensive Accessibility Center. New additions include a team of 140 service professionals, who will tackle tasks such as making Web pages easier to read or Webcasts clearer to hear. As a result of their work, 76 million aging “baby boomers” (born between 1946 and 1964), who may need reading glasses to see or have diminished hearing, can benefit from technology that was originally designed for those with disabilities.

“At any time, any of us can be temporarily or permanently disabled,” says Ralph Martino, vice president of strategy and marketing for IBM Global Services. “As computer technology matures, computer users are demanding easier-to-use, more mobile technology. The braille keyboards available to visually impaired users a generation ago have evolved into hands-free technology, something that anyone who uses a cell phone while driving a car can appreciate. All of us benefit as computers and technology become easier to use.”

IBM’s experience draws on its commitment to furnish employees with accessible equipment. In 1999, the company adopted an internal, corporate-wide requirement to make the company’s computer hardware, software, and Web sites accessible for hundreds of thousands of IBM employees worldwide. Now available as desktop support services, the technology is available for direct purchase or as part of an outsourcing services agreement.

Another technology leader, Xerox Corporation, recently launched Copier Assistant software, which caters to employees who are blind, visually impaired, in wheelchairs, or have limited dexterity. The software allows employees with disabilities to operate copiers from a personal computer, without assistance from others. Embedded text-to-speech abilities “talk” a person through various copying steps, including stapling, collating, and two-sided copying.

“A generation ago, the goal was to remove physical barriers, to provide wheelchair-accessible sidewalks and ramps,” IBM’s Martino notes. “Today, we want to remove the barriers that prevent access to everyday business applications, or access to e-business on demand services on the Web.”