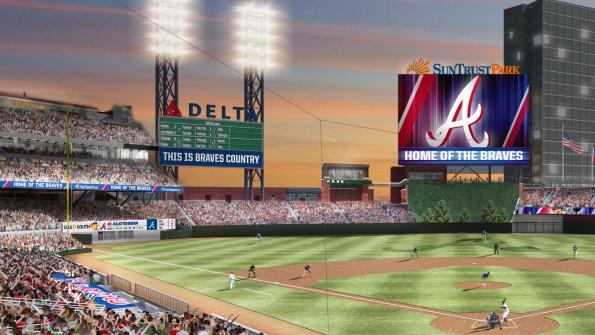 For baseball fans, opening day brings excitement and renewed hope that this year’s team will surpass all expectations to bring home more wins than last season. When opening day is in a new stadium, the excitement and expectations are escalated as fans clamor to experience their first game. For just-opened SunTrust Park, the new home of the Atlanta Braves, public safety officials wanted to ensure all the fans had an experience unlike any other while keeping the community safe.

As opening day plans were being finalized, public safety leaders were completing the traffic and security measures to be carried out around SunTrust Park. On opening day, April 14, officials performed their well-planned processes and procedures to ensure traffic flowed smoothly and the safety of the thousands of visitors attending the game wasn’t compromised.

Critical to the implementation of these plans was a list of items that needed to be purchased and delivered prior to opening day. The local police department had several meetings with Bill Thomas, Supervisor of General Purchasing for Cobb County, to outline their needed supplies and product specifications. Some of the requirements included more than 1,000 safety cones, metal barricades, golf carts, all-terrain vehicles, safety balloons, generators and covered trailers – representing more than $100,000 in needed supplies.

Opening day was quickly approaching, and Thomas needed to ensure that the procurement of the extensive list proceeded smoothly. To do this, he turned to two U.S. Communities contracts: Safeware for the majority of the public safety items, and Club Car for the transportation vehicles.

Thomas proposed the cooperative contracts to the public safety team. “Using these contracts would save a lot of time by eliminating the need for an RFP and I knew we would get their lowest pricing,” Thomas says. “Everything that was needed was available through these two contracts which really streamlined the entire process.”

As an Advisory Board member for U.S. Communities since 2001 (currently represented by Joe Tommie, Purchasing Director), Cobb County is familiar with the advantages of using U.S. Communities contracts. The solicitation process by a lead public agency is similar to the Cobb County purchasing process, so the requirements for a competitive bid are met. Being able to use a cooperative contract streamlines the entire purchasing process and eliminates the time needed for an RFP. In addition, U.S. Communities holds rigorous supplier commitments to ensure their supplier partners offer their best government pricing. “Using U.S. Communities, we knew we were getting the most competitive pricing,” Thomas explains.

Arriving at opening day without the needed security items was not an option. Before proceeding, Thomas focused on the majority of the public safety needs and had several meetings with Safeware to ensure the items police needed were covered under the contract and would be delivered by the designated dates. “I wanted absolute confirmation there would be no issues with the purchase. Sometimes when working with a vendor, you start the process and then find out a particular item is not available or can’t be delivered by the needed date,” Thomas states. “Working with Safeware went as smoothly as it could have gone.”