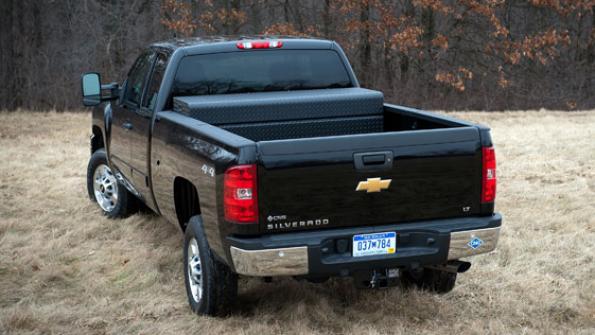 The first centers on the higher cost of diesel engines with the new selective catalytic reduction (SCR) emission control systems that meet stringent federal exhaust emission rules for diesel-powered trucks. Now, the cost of a diesel-powered truck is close to natural gas models without any government subsidies.

The other is better range. By early spring, OEMs added a whole new twist to the natural gas picture – rolling out bio-fuel pickups capable of running on both compressed natural gas (CNG) and gasoline, thereby eliminating long-standing concerns over range.

For example, GM introduced a 2013 model in April of its Chevrolet Silverado 2500 HD and GMC Sierra 2500 HD with a factory-installed CNG/gasoline propulsion system offering 17 gasoline gallon equivalent (GGE) worth of CNG storage – storage that occupies 25 percent of the usable space in the pickup bed – coupled to a 36 gallon gasoline tank.

GGEs are calculated as having the same energy equivalent as one gallon of gasoline, she notes, with CNG sold at filling stations in the U.S. priced in dollars per GGE. A gasoline gallon equivalent of CNG is approximately 14.5 liters at 3600 psi.

At current prices, which are generally $1.25 less than the gallon equivalent of gasoline, CNG promises significant cost savings over the life of the truck, GM says.

GM also notes that its bi-fuel pickup models are priced $11,000 above gasoline-only versions but cautions that there is a 12 percent falloff in horsepower when the vehicle shifts from gasoline to CNG power. Yet that big up-charge for a bi-fuel truck – which varies depending on the OEM and model selected – isn’t too far off from the diesel option.