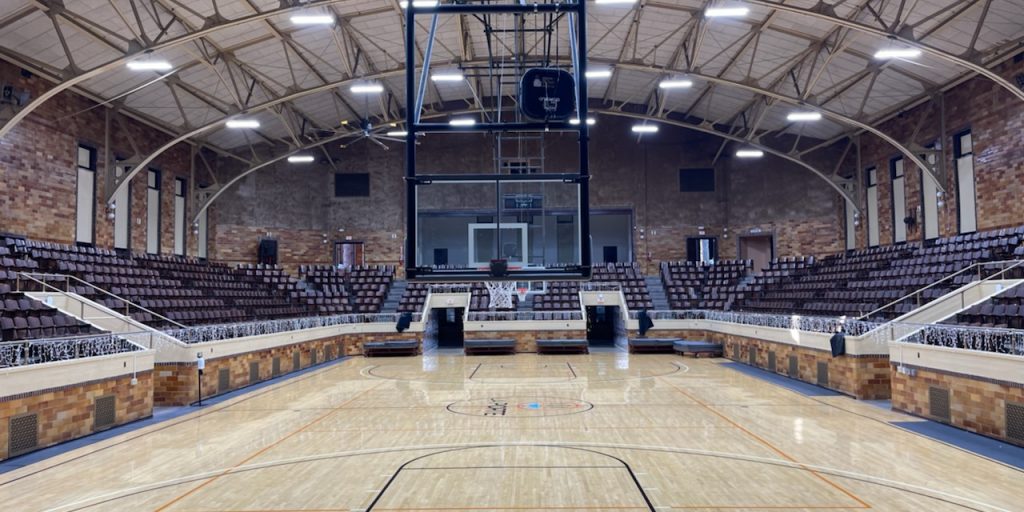 This week, La Porte, Ind., will host ESPN’s National Interscholastic Basketball Conference, an annual talent showcase featuring some of the best young basketball players in the United States. The competition, which is being held at different venues throughout the nation, started in December and will run through February.

Through Jan. 8, La Porte will be in the national spotlight, bringing in tourism dollars and promoting the city’s historic La Porte Civic Auditorium for future uses. It’s a big deal for the community of around 20,000 people—and a well-earned opportunity.

“This is quite exciting for us,” said Brett Binversie, La Porte’s events director. With more than 20 of ESPN’s top-ranked basketball players in the city at one time, “The whole mid-west has not seen a gathering of players and teams with national coverage. We were competing with Washington, D.C, New York, California.”

Winning the bid was a cherry on top following a lot of work from city administrators—both in the planning office and at job sites—leveraging their $11.6 million American Rescue Plan Act (ARPA) allotment to upgrade the auditorium for long term gains and a short-term win.

“The Civic (auditorium) was in need of $4 to $4.5 million of work,” said Mayor Tom Dermody, highlighting poor lighting, lack of air conditioning, inadequate seating and the need for a new roof, among other update requirements. “We could not finance or pay for to do these upgrades. The timing of this (Rescue Plan funding), not only for the short-term basketball tournament, but for the future of La Porte” was ideal.

All of the items were completed through the Rescue Plan.

More than the apt timing of the federal funding, the initiative was successful because of intentional forethought, according to Eric Walsh of the Baker Tilly Public Sector Practice Group, a firm that’s working with the city to make its ideas a reality.

Instead of looking at the funding as a means to an end, Binversie said the group considered the mayor’s broader vision and thought about the money as a way to “revive La Porte coming out of this pandemic. It’s a completely different message, rather than, ‘hey we’re going to invest ARPA funds into a building.’”

Along with the auditorium updates, city administrators prioritized affordable housing, a $100 million sewer project and public safety needs, Walsh said. Early in 2020, they’d invested $8 million of their own money to begin the wastewater project and used much of their Rescue Plan allotment when it was distributed the following year to pay for affordable housing and public safety needs.

The remainder went to the auditorium, which was being used as a COVID testing center and vaccination site at the time, making it an eligible use for the money. Historically, the 100-year-old building has also been used as a public emergency shelter and a location for food drives, in addition to its tourism and recreational uses.

La Porte’s vision-first approach to spending their federal dollars was so effective and efficient that Walsh said his firm has adopted their model as standard. And now, with the successful passage of the bipartisan infrastructure, Walsh noted that community leaders will have another opportunity to consider the best way to make their vision a reality.

In La Porte, Dermody said that, once the basketball tournament is complete, administrators there intend to begin applying for more federal dollars made available through the infrastructure bill—in order to check off another project from their long-term plan.

“We will compete with everyone from the nation,” Dermody said, noting a north-south corridor project that’s particularly high on their priority list. Hopefully, it “will turn our downtown into a more walkable (space),” he said.