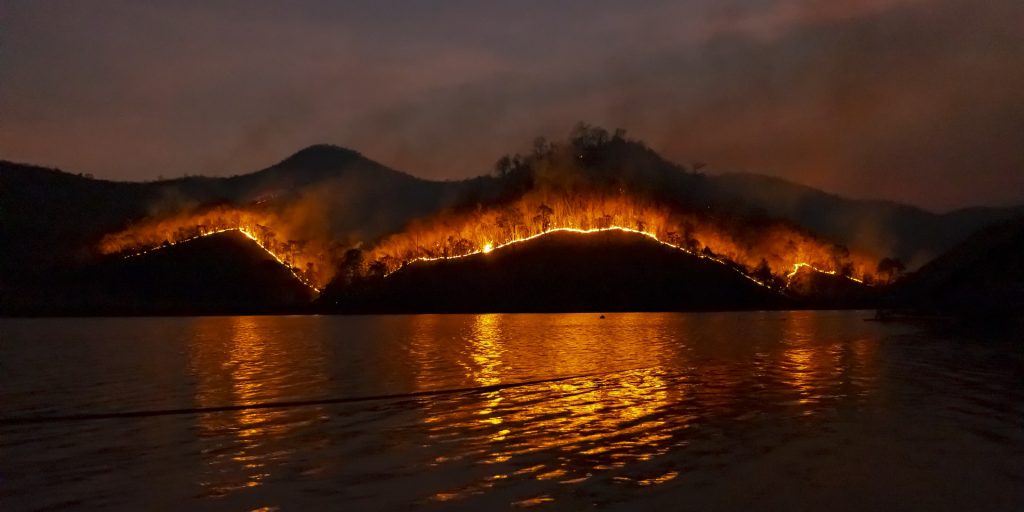 Patchwork of land management adds complexity in the fight against wildfire

The sunset Monday night was spectacular. Amber tones stretched across the horizon and the sun itself was draped with an orange gradient. But the beautiful haze obscured a more sobering reality—smoke drifting across from wildfires burning in the west prompted environmental agencies throughout the United States to issue air quality advisories through Tuesday evening.

“Currently, 85 large fires have burned 1.5 million acres in 13 states. The commitment of resources to wildfires continues as more than 22,400 wildland fire fighters and incident management teams are assigned to incidents,” according to a July 26 update from the National Interagency Fire Center.

Over the last 40 years or so, wildfires have become more intense and damaging due to several factors, among them climate change and complex layers of land management. Since federal wildfire agencies began tracking wildfire data in 1983, the average acreage burned in a season has increased from around 2 to 4 million in the 1980s and ’90s to 6 to 10 million in the last two decades, based on statistics from the National Interagency Coordination Center.

“Everything has changed in wildfire in the last five years. We’re seeing the largest, most intense wildfires in the history of the country. And we’re not seeing a trend line that it gets better,” said Jeff Johnson, CEO of the Western Fire Chiefs Association, which represents career and volunteer firefighters throughout the western states and the Western Pacific Islands. Before leading Western Fire Chiefs, Johnson served as president of the International Fire Chiefs and Oregon State Fire Chiefs. He was a firefighter for more than 30 years, including 15 as a chief.

“There are a lot of moving pieces right now. A lot of the problems that are exacerbating the scope and scale of these fires, a lot of these things are not easily fixed,” Johnson said. “The most prominent one is that the forests are drier than they’ve ever been before. The fact is that weather events have changed the moisture content in small and large fuels.”

Advancements in firefighting tactics over the last century smothered naturally occurring wildfires, which play a key role in balancing certain ecosystems because they thin out trees and generate new growth. But as climate change drives increasingly hot summers and associated droughts, denser forests make for a dry and abundant fuel load. All that is needed to set off an uncontrollable inferno is an ignition source such as a lightning strike or, in the case of the ongoing Dixie Fire in California’s Butte County, malfunctioning or damaged utility equipment.

In a notice submitted by Pacific Gas & Electric (PG&E) to regulators earlier this month, the public utility company reported the Dixie Fire was ignited July 13 after a tree fell on the Bucks Creek conductor, blowing three fuses and apparently sending sparks into the underbrush.

The report, while informative as a news item, also provides a public glimpse at the complicated governing structure that municipalities and counties must work within to try and reduce the damage wildfires inflict. In terms of affecting the practices of investor-owned utility companies like PG&E, Johnson explained that municipalities oftentimes can only exert influence tangentially through utility commissions. State law takes precedence and, especially in the west, land management practices aren’t always cohesive due to multiple layers of government.

“It’s very different in the west—and I don’t say that geographically—if you open up Google right now and find out what percentage of Oregon is owned by the state, (it’s) right about 60. California isn’t much different,” Johnson said. “It’s extremely different when the government owns the majority of the land in your state.”

In practical terms, this means that many individual city and county leaders in the areas of the country most prone to wildfires must operate within bureaucracy to balance conflicting public and private interests.

“You add all that up and, A, it’s a patchwork, and B, these solutions will take a little bit of time to implement. Part of that is the complexity of the management matric, and part if it is because these problems aren’t easy to solve,” Johnson said, citing the 1866 Oregon and California Railroad Act as an example of a particularly complex section of the United States. The act made nearly 4 million acres of land available to any company that built a railroad from Portland to San Francisco. As a result, land was given out in a checkerboard pattern to two competing companies. Those boundaries still exist, making a cohesive approach to land management difficult.

“When you look at that map, you have to ask yourself: ‘how, in this seemingly endless forest, do you manage this section differently than that one?’” Johnson said. But while bureaucracy makes it difficult to manage land, “Geopolitical boundaries mean nothing to wildfire.” And fighting it “takes a pretty extraordinary amount of coordination.”

Against this backdrop of complexity, one mechanism in particular has proven effective in changing the way utility companies operate: settlements and litigation.

“Those are probably driving more change than anything,” he continued, highlighting the Camp Fire in 2018 as a notable example of a catalyst for change. In the fallout of the tragic fire, PG&E filed for Chapter 11 bankruptcy, citing billions of lost dollars to fines and liability stemming from wildfires. State investigators found PG&E to be at fault for the fire and the utility company pleaded guilty to 84 felony counts of involuntary manslaughter last year along with one felony count of unlawfully starting a fire.

“That was probably one of the most significant events that brought the utilities, the fire event, the legislature and civil litigation to bear on change,” Johnson said.

While new policies are still being considered in the Camp Fire’s aftermath, one notable change enacted in 2018 dictates stricter limits on when utility companies need to disable power lines.

And last week, citing the Camp Fire along with other catastrophic fires in 2017, PG&E’s CEO Patti Poppe announced the company will bury 10,000 miles of power lines in districts determined to be high fire risk to prevent future wildfires. The utility company maintains more than 25,000 miles of overhead distribution power lines in high risk fire areas.

“We want what all of our customers want: a safe and resilient energy system. We will partner with the best and the brightest to bring that stand to life. We will demand excellence of ourselves. We will gladly partner with policymakers and state and local leaders to map a path we can all believe in,” Poppe said.