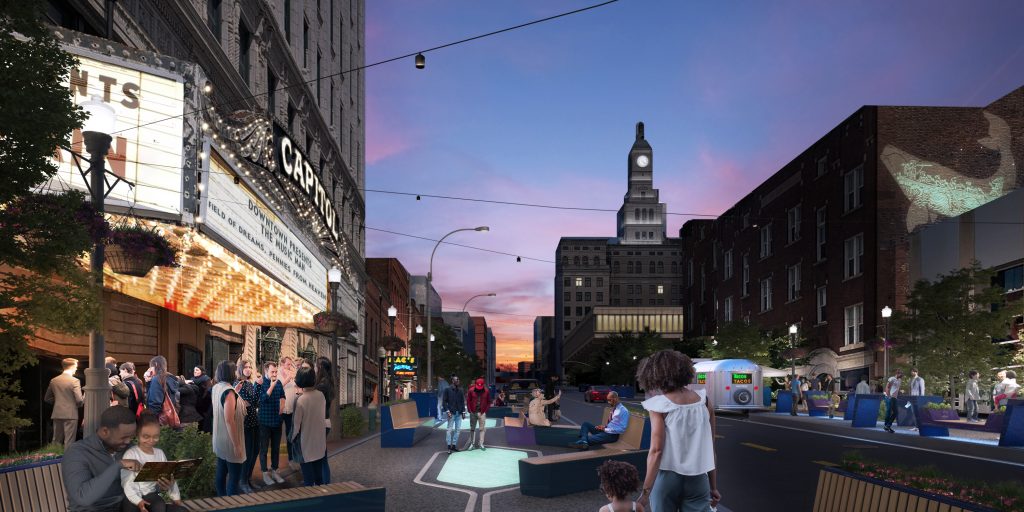 Over the past two decades, as superstar cities like New York and San Francisco have concentrated much of the nation’s wealth, jobs and attention, small and mid-size cities have quietly flipped the script on strategic economic investment, placing renewed focus on local talent and inclusive placemaking. The resource they are focused on: their downtowns. In an era in which people increasingly choose to work remotely but live locally, a vibrant downtown represents a critical competitive advantage in the search for talent and the drive for economic growth. But growth for whom exactly, and how? By re-centering economic recovery around place-based amenities and infrastructure, local leaders can work to foster inclusive and sustainable growth from within, while shifting focus from national recruitment to local talent generation, cultural development and business innovation.

An instructive example today is found at the eastern edge of Iowa, where a new master plan has set the stage for a decade of transformative investment. Davenport, Iowa is the largest city in the Quad Cities, a bi-state region on the banks of the Mississippi River and the primary metropolitan area between Minneapolis, St. Louis, Chicago and Des Moines. The Quad Cities’ trajectory is a familiar one in the Midwest. The prosperity of the 19th and early 20th century gave way to economic decline in the 1980s following the farm crisis, with downtowns weakened by a proliferation of suburban development, parking lots and shopping malls.

True to its blue-collar history and DIY attitude, downtown Davenport began to turn its fortunes around in the early 2000s with a $113 million public/private placemaking investment in arts and infrastructure known as River Renaissance. Over the next two decades, this investment led to dozens of renovated historic buildings, a thriving live music, arts, hospitality, and entertainment industry, new and retained office jobs, and hundreds of additional market-rate and affordable apartment units. By 2019, the city’s resurgence was well underway with $600 million of new investments. Then disaster struck, as devastating Mississippi flood waters engulfed a portion of downtown, a setback shortly thereafter by the onset of COVID-19.

In the wake of these consecutive disasters, the Downtown Davenport Partnership (DDP), an affiliate of the Quad Cities Chamber of Commerce, began a new planning process with the City of Davenport to ask itself, its residents and its stakeholders to envision the next evolution of downtown. As the local place management organization, DDP hired WXY, a New York-based planning and design firm, to help imagine a more resilient city focused on economic recovery and local growth in incremental stages of investment and activation.

The plan emphasizes not just quality-of-life amenities and infrastructure, but also fostering a small-business ecosystem founded on principles of diversity, equity and inclusion. This includes everything from seeking more funding for minority-owned businesses, to greater access to business coaching and improved coordination with business-community service providers. Infrastructure investment and public space are core to the plan, with streets envisioned to prioritize pedestrians and additional curbside flexibility for restaurants and retail. In response to the 2019 flood, a new civic vision for the Mississippi riverfront strives to balance playfulness and ecological remediation with necessary flood protection and resilience. These improvements connect to a network of active public gathering spaces designed to create a more welcoming, inclusive and accessible downtown.

As downtown goes, so goes the city. As we look towards post-pandemic recovery, cities like Davenport and regions like the Quad Cities offer a glimpse into how cities can reframe the future of American cities around local and regional growth. One thing is clear; small and mid-size cities must act to remain relevant and competitive in the modern landscape. Leveraging your downtown with a renewed focus on aligning culture with place, embracing the smaller scale, and celebrating the value of local economies and all of their people can be a blueprint for a brighter future.

In February 2020, the Downtown Davenport Partnership (DDP) commissioned the development of a master plan—to provide a framework for growth in the downtown—over the next 10 years. The plan will serve as guide to build on the success of the past 15 years, which has seen Downtown Davenport grow into a burgeoning residential neighborhood, a regional destination, and a center for arts, culture, and entertainment in the Quad Cities region. With this master planning process, the DDP and the City of Davenport have endeavored to answer one important question key to the future of Davenport: how can the City grow inclusively and sustainably, and what are the steps needed to get there?

Why a Downtown Davenport master plan?

Downtown Davenport has grown, in population and economic vitality, despite significant challenges faced by the city and the region. A changing climate has increased the frequency and severity of floods. In May 2019, Davenport experience record high flood waters reaching almost 23 feet, causing economic devastation for countless downtown business owners. 2020 has brought an entirely new set of challenges. The COVID-19 global health crisis has caused an economic recession and the highest reported unemployment in U.S. history. Across the country, civil unrest stemming from systemic injustice has forced millions to confront decades of racist policies and entrenched segregation.

This trifecta of issues—the environment, the economy and equity—elevates the importance of this moment as an inflection point for Downtown Davenport and the forces that shape it. Local leaders must move with confidence and intentionality as their decision-making is critical to the well-being of all Davenport residents. Davenport 2030: A Resilient City, focuses on the downtown because the health of Davenport’s downtown reflects the social and economic health of the city.