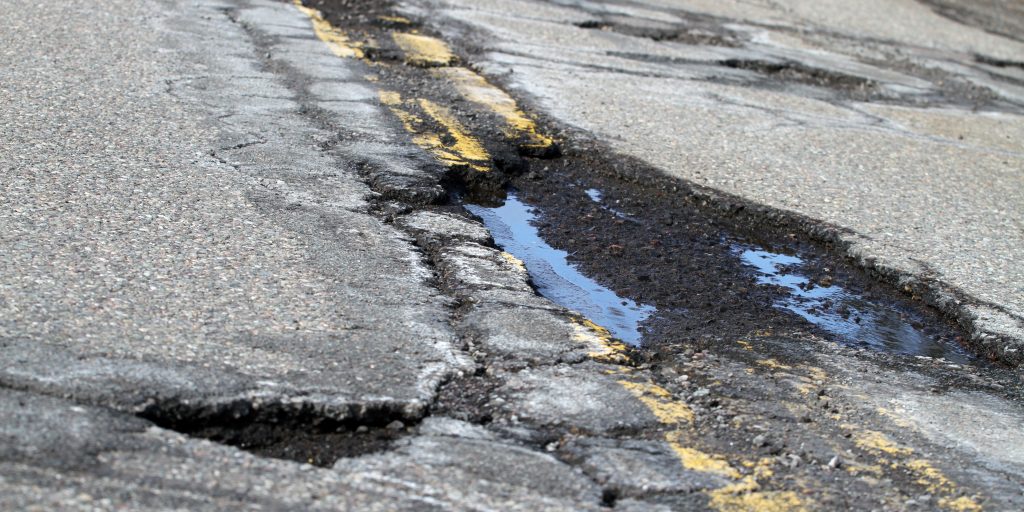 The rocky road ahead

The COVID-19 pandemic is draining government coffers nationwide. How will this affect America’s already-questionable infrastructure?

It’s not exactly a grade to write home about. “The fact that we have a D+ is embarrassing as a nation,” says National League of Cities (NLC) CEO and Executive Director Clarence Anthony.

For ASCE Senior Managing Director Casey Dinges though, the grade was disappointing but hardly a surprise. Since ASCE began its report card, the country’s overall infrastructure grade has hovered between a D and D+, according to ASCE’s 2017 Infrastructure Report Card.

The grade has weight, too — our subpar infrastructure is hurting the U.S. economy. Poor roads and airports increase travel times, while unreliable utility infrastructure yields unreliable service, ASCE notes in its “Failure to Act” series of reports released between 2011 and 2012.

Moreover, ASCE found that failing to improve infrastructure would cost the U.S. economy $3.9 trillion in gross domestic product and 2.5 million jobs by 2025.

The outlook on improving that grade is questionable, as the ongoing novel coronavirus pandemic continues jeopardizing public funds.

In June, the NLC surveyed 1,117 municipalities and found that cities are expected to lose $360 billion over the next three years. People remaining inside their homes due to government guidelines has yielded a reduction in fee-based revenues as well as sales tax revenue for municipalities.

“What we were hearing was that municipal leaders were saying that they were having major impacts because of their response to [the] COVID-19 pandemic, and the fact that they had to shut down their communities while also providing services,” Anthony says of the NLC. “So, what we saw was [an] increase in expenses and a loss in revenue.”

Infrastructure has not been immune to those cuts, either. Cutting infrastructure, however, could cause dire stress on an already strained economy.

“What was already a serious issue we thought, [with] the nation’s infrastructure, giving it a D+ in 2017… the situation’s really getting worse now,” Dinges says.

Of the municipalities queried in the NLC survey, 65 percent are either having to delay or cancel infrastructure projects and capital expenditures. The only item that more cities made cuts to was summer-specific programming (66 percent vs. 65 percent).

How those delays and cancellations will affect municipalities is a matter we are still learning. Consider for instance, the experiences of Aurora, Colo.; Saint Charles, Mo.; Greenvllle, N.C. and Germantown, Tenn.

“I would say if we haven’t moved any dirt yet, it’s not going to happen,” Aurora Mayor Mike Coffman says of his city’s infrastructure projects.

That’s partly because the pandemic has aggravated a pre-existing road maintenance deficit in Aurora, Coffman says. He calls it deeply concerning because road reconstruction — a disruptive and costly process — might have to occur if the road maintenance budget deficit can’t be fixed.

It’s easier said than done, though — Coffman notes that a “significant downturn” in sales tax due to the pandemic has driven a hole in Aurora’s budget. He estimates that Aurora will incur a deficit of $30 million next year, predominantly due to sales tax.

Similarly, all of Saint Charles’s capital projects that hadn’t been started got frozen, along with most spending in the city, Saint Charles  Director of Administration Larry Dobrosky says. The city’s maintenance capital dollars got cut to approximately half of the previous total.

For Saint Charles, uncertainty about when things will go back to “normal” or what going back to that normal will look like has made financial forecasting difficult.

“Having to forecast out over the next five to six years, we took a very conservative approach,” Dobrosky says. “And so, a significant amount of capital projects got put to the out years, and everything probably got pushed out at least one year from where it was.”

Greenville saw a significant decrease in its sales tax revenue beginning in mid-March, Greenville Mayor P.J. Connelly says. The result is that the city has pushed off facility improvements, as well as projects in which it was partnering with the North Carolina Department of Transportation.

Funds for the latter projects have instead been used in other manners, Connelly says. Greenville’s infrastructure projects have also seen a slowdown.

Meanwhile, Germantown endured about a 35 percent reduction in its local sales tax, occupancy tax and sales tax shared with the state, according to Germantown City Administrator Patrick Lawton.

Accordingly, the city has canceled projects and moved about $17 million in projects out of the 2021 fiscal year, Lawton says. This year, the city is focused on roads and intersections.

The city has also had to drop expenditures in infrastructure replacement and capital, Lawton says. The reasoning for these moves related to a desire to maintain the city’s AAA bond rating with Standard & Poor’s and Moody’s, while ensuring it could avoid dipping into its reserve funds.

“We take this very seriously, and we understand that we’re going to be in this crisis until there’s a vaccine, but we’re managing through it, and we will be presenting a balanced budget here,” Lawton says.

So far, the federal government has not provided any new infrastructure funding aid since the pandemic made landfall in the U.S.

The federal CARES Act however, established the $150 billion Coronavirus Relief Fund, which provides states and certain local governments with $150 billion to be used to cover necessary expenditures incurred due to the coronavirus pandemic, according to the U.S. Department of the Treasury.

Just 36 jurisdictions with over 500,000 residents received direct funding from the CARES Act. Other cities are relying on their state and county governments to distribute CARES Act funds to them.

Nearly 70 percent of cities from the NLC survey, however, had not received CARES Act funding as of June. Meanwhile, the funds must be expended by Dec. 31, Anthony says.

“What we have advocated for is, pushed our cities to go to their governors and ask for those dollars, and say and show the impact. And that’s been slow and coming,” Anthony says.

As of July 7, Germantown was one of the cities that hadn’t received CARES Act funds from its county or state. But Germantown already doesn’t rely on much government funding from the federal government, Lawton says.

“Hence our position to say to the folks in the House and the Senate, ‘pass some legislation that has dollars available for cities to stimulate the economy through construction and capital improvement projects, not for operations,’” Lawton says.

The Moving Forward Act, also known as the INVEST in America Act or H.R. 2, however, could be that legislation. Passed by the U.S. House of Representatives on July 1, it is a $1.5 trillion plan for investing in infrastructure across the U.S., according to a fact sheet from the U.S. House Committees on Transportation & Infrastructure.

Coffman in Aurora welcomes the federal government’s help with local and state governments’ budget deficits. But he and the Aurora government aren’t relying on it — they’re moving forward with no anticipation of receiving federal help. “I think that that’s wise and fiscally conservative,” Coffman says.

Dinges praises parts of the bill, particularly its size and depth, as well as its focus on resiliency.

“We’ve been fighting for an infrastructure bill for probably 10 to 15 years, and it’s time now that we get an infrastructure bill,” Anthony says. “And we’re very supportive of [the Moving Forward Act]… That’s a good start. It is not a substitute for the money that we need for stimulus four.”

Such economic stimulation is needed, too. Because even with more funding, leaders note that delaying infrastructure projects will have greater effects than just postponing local development.

“America’s economy starts at the local level,” Anthony says. “And then it stimulates up to the national level. If cities are not prosperous, America will not be prosperous.”

Sixty-one percent of cities in the NLC survey reported either delaying or canceling equipment purchases. This will hurt local commercial activity among equipment providers for public projects, an info sheet on the survey predicts.

“As we see projects being delayed, of course, there’s going to be less work in our community,” Connelly says of Greenville. “So, different businesses and different construction companies will probably have to make decisions as far as personnel is concerned. So, that’s always a concern; we want to keep people working as much as possible.”

But even faced with economic troubles and no guarantee that the Moving Forward Act will get signed into law, hope still exists for making local infrastructure projects happen.

For Dinges, infrastructure has both short-term and long-term benefits for cities. It helps cities in the short term due to generating lots of economic activity in bringing in materials for a project and then building and working on the project. However, the finished and upgraded infrastructure has a ripple effect on the local community, as well as potentially a state and even the nation.

Less economic activity has mitigated traffic, and Dinges notes that that decrease has both created a safer workspace for infrastructure workers and made it easier to move the materials and equipment used for bridge and highway projects.

“The only encouraging aspect of [the pandemic[, and I use that word guardedly…is that in some cases in some communities, there’s been some acceleration in some of the projects they’re working on,” Dinges says, adding that the projects are usually bigger in scope and well-along.

Saint Charles is one of those communities. The city has scaled back a lot of its capital projects, but it’s fully moving forward with some major economic development measures and ensuring that funding on some of its major projects is moving forward, according to Dobrosky. Some of those projects comprise about seven miles of riverfront development that the city is continuing to work on.

Dobrosky notes that while nothing truly positive has come from the pandemic, it has still created some opportunity from an economic development, planning and infrastructure standpoint. A lack of work has brought more competitive bids and better pricing, while banks are providing better interest rates.

“Now is the time to get out and do some of those projects that maybe you were on the fence on, because money’s cheaper, and people are looking for work, and it’s still quality work,” Dobrosky says.

“I think you’ve got to take advantage of opportunities when they come,” he says. “And while this may not be the greatest time, it’s a great opportunity.”