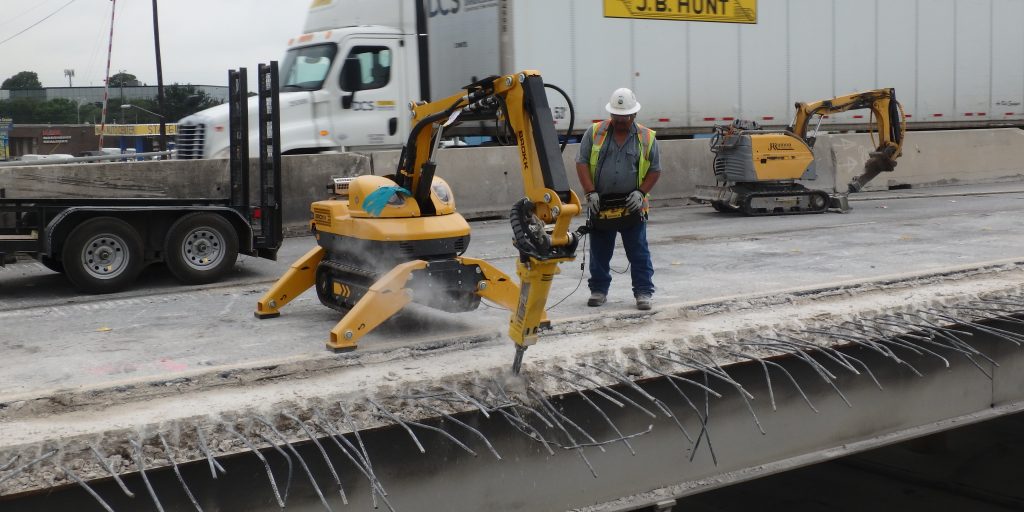 Every day in the United States, 188 million vehicles pass over a structurally deficient bridge. Each year, hundreds of injuries and even deaths occur from decaying infrastructure. It’s a major problem — and one that’s been well-documented by the American Society of Civil Engineers.

Out of 614,387 U.S. bridges, almost 40 percent are 50 years or older and 9.1 percent are structurally deficient. A recent estimate lists the U.S.’ backlog of bridge rehabilitation needs at $123 billion.

When infrastructure funding comes through, contractors need to be ready with the fastest, most productive options to take on the heavy, urgent workload.

More and more are turning to remote-controlled demolition and hydrodemolition machines as solutions. After experiencing worker shortages, increasing workers’ compensation claims and growing insurance premiums, the higher cost of the equipment starts to take a backseat. Remote-controlled machines provide more safety, productivity and efficiency for removing concrete around rebar than handheld tools, mini excavators and backhoes. And, that adds up to a fast ROI.

Traditional bridge deck work involves a lot of workers with handheld pneumatic tools breaking through concrete to expose the rebar below. A major limitation of handheld tools is the operators. A person can’t apply nearly as much force into the tool or do so as consistently as a remote-controlled demolition machine can. Although machines don’t fatigue, operators do — and they do so incredibly faster when powering a jackhammer as opposed to operating a control box fastened around their waist.

Remote-controlled demolition machines come in varying configurations and weights so that the most productive option can be matched to each job. In addition, contractors can choose between electric- and diesel-powered models.

Remote-controlled demolition robots cut the number of necessary laborers and speed up the concrete removal process. In certain cases, a remote-controlled unit equipped with a breaker attachment and controlled by an operator and one spotter can break up 2 square feet of bridge deck concrete in 15 minutes. The same area in the same amount of time would require three workers with handheld tools. Productivity is increased as a result, reducing labor costs by about 33 percent while accomplishing the task in less time.

The result of either type of equipment is hours, if not days, of savings over the course of a job. That adds up to potential bonuses for early completion as well as improved chances at more contracts.

When it comes to bridge or road repair and rehabilitation the need for precision and minimal microfracturing are major considerations. Handheld tools combined with operator error simply don’t make the cut. Similarly, an excavator paired with demolition tools lacks the precision to effectively accomplish the task without damaging rebar. In this instance, hydrodemolition robots shine.

The technology virtually eliminates the possibility of unintended damage during bridge repair or rehabilitation. Typically, jets of water at pressures of about 20,000 psi are directed at the surface of the bridge deck, quickly removing layers of concrete but leaving rebar unscathed and clean. There’s no need to spend extra time carefully avoiding rebar because the high-pressure water­ — though devastating to concrete — doesn’t damage the metal bars. This maintains bridge safety and saves time and money replacing and repairing damaged rebar — a process that can delay a project by days and cost tens of thousands of dollars in repair. The method also doesn’t cause vibrations, eliminating the possibility of microfracturing that could threaten bridge stability.

In some applications limited in scope, remote-controlled demolition machines’ offer the ability to perform precise “dental” work on bridge decks. Because the force of the breaker is matched to the robot and can be adjusted based on the conditions, the possibility of damaging the underlying rebar during concrete removal is drastically reduced.

Even the most productive tool needs an operator. As the workforce ages, contractors are having difficulty recruiting younger workers pivotal to helping meet the infrastructure demands to come. Remote-controlled robots can help attract millennials by appealing to their fondness for technology and innovation. As a result, they are often fast-learners with the equipment.

Improved safety from the high-tech equipment also helps recruit new workers and retain existing employees. Remote-controlled demolition and hydrodemolition robots allow laborers to monitor their work a safe distance from flying debris and edges that pose a falling risk. The elimination of the need to stand next to a ledge also means contractors can minimize setting up fall protection systems. In addition, where large equipment such as excavators require multiple lane closures, demolition robots typically only require one lane closure, minimizing traffic impact.

Also consider worker strain from handheld pneumatic tools, such as rivet busters, that can result in more workers’ comp claims and cause insurance premiums to skyrocket. The equipment’s heavy vibrations can lead to injuries such as carpal tunnel syndrome, nerve damage and hand-arm vibration syndrome. Remote equipment eliminates that risk and prevents fatigue-related mistakes and injuries common after long periods of time operating handheld tools. The machines’ safety benefits mean some companies receive insurance discounts when adding such equipment to their fleets because the provider sees how safety on the jobsite has improved.

Until infrastructure funding is passed, the number of bridges in dire need of repair will continue to skyrocket. However, funding will eventually need to be addressed and these structures repaired before liabilities escalate. Contractors that prepare, plan and incorporate technology solutions into their business will be able to successfully, efficiently and profitably address these needs.

Mike Martin is vice president of operations for Brokk in Monroe, Wash. He is an industry veteran with 29 years of experience helping Brokk owners build their businesses with remote-controlled demolition.