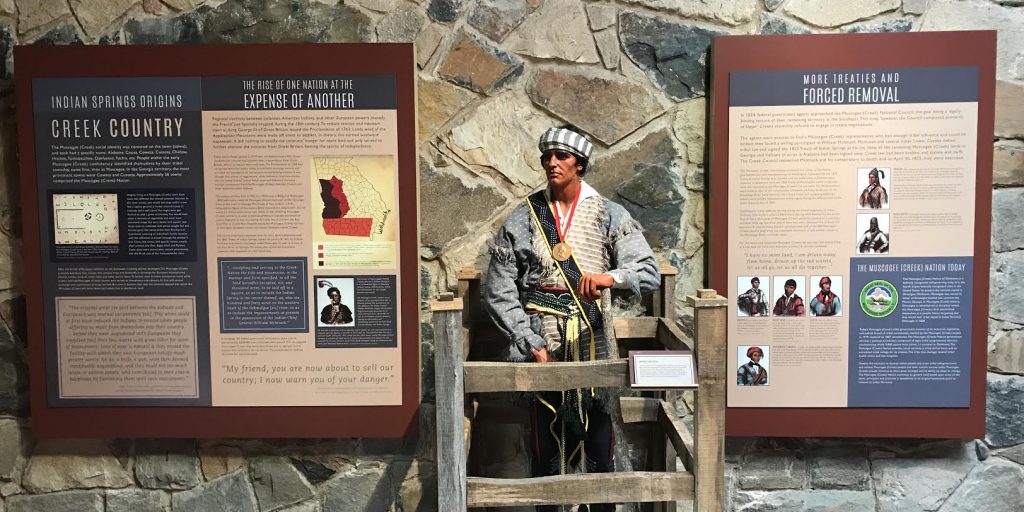 When my complaint about the historical plaques at Indian Springs State Park landed on Park Manager Katherine Darsey’s desk, she was more than a little surprised.

“I’ve been [in my position] for over 5 years, and in that time no one’s said anything about [the plaques],” she said. “A lot of people overlook them and don’t think about them, so when we received your letter, we decided it was something we needed to look into.”

I don’t often take grievances to government entities. The few times I have – calling or writing to my local reps, for example – I’ve been disappointed. Occasionally I’d receive a generic, placatory letter in response, but most often I received no response at all.

So, when I saw the antiquated (and, by modern standards, offensive) language on the plaques at Indian Springs and reached out to Judd Smith, parks historian, I expected more of the same.

What I got was anything but.

Smith immediately took action and enlisted colleagues, including Darsey, to investigate the best way forward. Step one was assessing the plaques themselves.

“The wording was undesirable,” Darsey said, referring to the text, which called Native Americans “Indians” and glossed over the forced removal of the Muskogee (Creek) Nation, intimating that the seizure of Indian Springs and its sacred waters, was entirely voluntary.

The plaques were installed by the Civilian Conservation Corps (CCC) in the 1930s, and, as such, had become pieces of history in their own right. But, as Darsey noted, “The fact that they’re old isn’t an excuse for the inaccuracies. Not by any stretch.”

Within the parks department, discussions began as to whether to replace the plaques or leave them as a display unto themselves, with new interpretive panels added for historical context. However, vandals made the decision for the department, etching unsavory graffiti into the CCC plaques and ruining any chance at preservation.

New plaques would be required, but the next step was more challenging.

Smith and Darsey had been hoping to improve the museum at Indian Springs for years but had been unable to secure funding for the project. While the new panels were labeled a “high priority replacement” and covered by allotted funds, the museum updates required Smith and Darsey to petition for funding from the greater state parks budget.

Their efforts paid off. They were appropriated more than $20,000.

“Most of the funds… came from what is known as ParkPass funds,” Smith said. “Every time a vehicle parks on a state park our division collects parking fees, currently $5 per vehicle, those funds are used for larger projects throughout the state park system. Projects like the museum renovation at Indian Springs come from those funds.”

With funding now in place, Smith and Darsey moved on to research and development. Smith communicated with representatives from the Muskogee (Creek) people, now in Oklahoma, and elicited their input for the proposed interpretive panels. He also researched the history of Indian Springs, including its geographic and geologic attributes, its importance to the Muskogee (Creek), its development as a resort area with a thriving hospitality industry and its transformation, under the CCC, to a park – all of which are covered in the new panels and museum updates.

“We obviously cannot tell the entire history of the area and all the events that shaped its history, but we tried to use the media we had access to and the research that has been done over the years to create a visually moving and well written interpretative narrative that tells the history of Indian Springs in a meaningful way for modern park visitors,” Smith said.

The new panel by the park springhouse was installed in late spring/early summer 2019, and the museum completed its renovations in September. The museum opened for visitors this month, in time for Indigenous People’s Day.

Thus far, public response has been positive. Smith said he enjoys sharing the history of Indian Springs and loves that he and other park visitors can “look back on hundreds of years of history and have a glimpse of those earlier times, and let our imaginations take us back there.”

Darsey said she feels a great sense of accomplishment from the project. “I feel that the community has been heard, and we are taking action and learning to respond to sensitive situations. Changes were needed, and I am glad I got to be a part of it.”