Nighttime skyline of Albuquerque at night in front of Sandia Mountains. Photo via Getty Images. 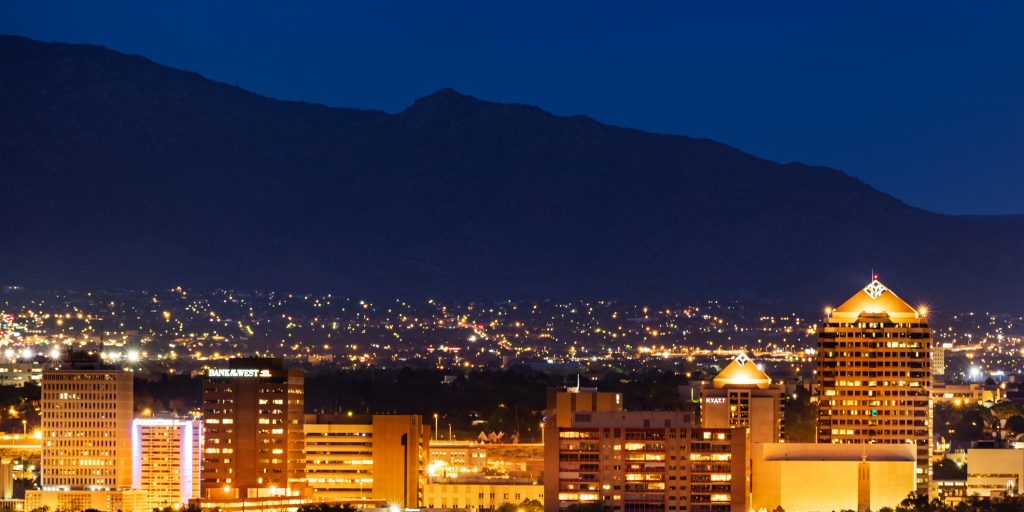 A new agreement between New Mexico’s largest city and its largest electricity provider is bringing Albuquerque one step closer to running on 100 percent renewable energy.

On Nov. 21, the city’s Mayor Tim Keller announced it’s partnership with Public Services Company New Mexico (PNM) to build a new solar power generation station that will in turn boost the amount of renewable energy that the city can use to power its buildings, the Associated Press reports.

“PNM is excited to work with the city and Mayor Keller in support of the ongoing transition to cleaner, more sustainable energy resources,” Pat Vincent-Collawn, chairman, president and CEO of PNM said, according to the Albuquerque Journal. “Taking advantage of new technology to bring renewable energy to the city of Albuquerque and all PNM customers is another important step toward creating the innovative, sustainable and interconnected community that we all envision.”

Powering city buildings currently costs $1.2 million per month, with only 4 percent of the city’s energy portfolio consists of renewable energy, the AP reports.

As part of the new agreement, the city will buy 25 megawatts of solar electricity that the 50 megawatt plant would generate, according to the Journal. Once the PNM solar project is done however, the city will be able to switch 58 percent of its energy use to solar power within two years, KRQE Media reports.

“We are a huge payer of electricity bills and so we want to try to minimize that as best that we can and that also includes a commitment to dealing with issues around climate change and sustainability,” Keller said, per the AP.

The agreement with PNM is part of a larger sustainability plan that Albuquerque announced on Nov. 21, according to the Journal. The plan’s goal is to have the city run on 100 percent renewable energy by 2022.

“We have a responsibility to current and future generations to put the City on a path to sustainability,” Keller said in a city news release. “With this plan, we’ll get Albuquerque a large part of the way to using only renewable energy. There’s no reason not to seize upon our natural advantages like year-round sunshine to help build a better world. We are always looking for innovative ways to protect our environment and save taxpayers money, and this is a big step toward achieving those goals.”

In 2016, Albuquerque set a goal to generate 25 percent of its municipal buildings’ energy through renewable resources, the AP reports. After Keller took office in late 2017, he introduced a $25 million, bond-financed project that involved installing solar panels at a dozen municipally-owned buildings.

“We cannot wait any longer to do all that we can to try and combat the damage caused by climate change to our environment, our economy and our way of life,” Keller said, per the Journal. “It also means taking concrete steps to reduce our carbon footprint, and also put Albuquerque on a more sustainable path and reducing the cost of that very electricity bill.”

Once the plan is implemented by 2022, it will equate to removing about 93,000 metric tons of carbon dioxide emissions each year, or the equivalent of removing around 20,000 cars from the road in one year, the Journal reports.